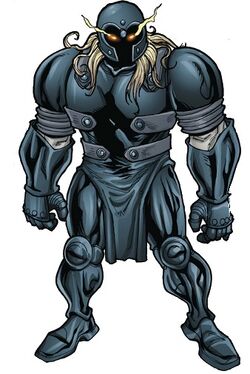 Gor-Tok was a prince of a once-great civilization that had been existent many more years than the "Outer World," the normal world above ground. They were a great warrior tribe who won many wars. There were groups of them throughout the thousands of miles of caverns below ground. As his father was planning to take an army above ground to conquer the people there, a great earthquake destroyed all of the underground civilization and killed all of its people except for him. It caused him to become mutated by radiation, which made him inhuman in appearance. He believed the world above him was the cause of the destruction of his people and believed it was his duty to avenge his people. The earthquake was caused by Dr. Hunt who had invented a machine, that was capable of causing seismic tremors.[2]

He first confronted Iceman and the Beast in a subway tunnel where he eventually escaped into an underground cavern. He originally had had amnesia, but while exploring the caverns, he regained his memories. He then sought to use the machine to destroy the whole Earth even if it caused him to lose his life in the process.[2] He then confronted the X-Men, while using Dr. Hunt's machine. The X-Men succeeded in defeating him as the machine exploded. It seemed at the time that the blast had killed him. The X-Men believed that Charles Xavier had sacrificed his own life to stop Grotesk.[3]

Later, he tried to steal the Cavorite crystal and with it, destroy the world, thereby exacting his revenge on humanity.[4] Ms. Marvel appeared to battle him but failed in preventing him from obtaining the crystal. After a brief run-in with M.O.D.O.K. and AIM, Carol Danvers, while out on a date on the beach, discovered Grotesk trying to use a high-intensity laser to activate the crystals matrix interface. This time, Carol Danvers, now in the form of Ms. Marvel, was able to stop Grotesk. However, Grotesk was sucked into the power of the crystal, transporting him to another dimension.[5]

An alliances comprising of Moloids and Tyrannoids subterraneans and Lava Men bursts through the city street, and the Avengers assemble to drive them back underground. Pursuing their opponents, the heroes encounter the Mole Man, Tyrannus, and Grotesk (the latter now the ruler of the Lava Men not transformed by the passing of Cha'sa'dra), who reveal that they and their followers were not attacking the surface world, but rather fleeing the attacking Deviants, from whom they had long ago purloined their advanced technology. No sooner do Captain America and the Black Widow go to summon aid than their teammates are besieged by the Deviant leader Brutus and his mutate creations, while their new subterranean allies retreat to await the battle's outcome. Ultimately, the Avengers are taken captive by their foes.[6]

Grotesk held Donald Blake hostage, while his enslaved Lava Men push the Living Rock to the surface, where it will explode and devastate the world. Thor arrived to help but he was outnumbered until the Godpack arrive. With their help, Thor defeated Grotesk and destroy the Living Rock.[7]

The energies of the Living Rock had destroyed Grotesk's body. But his disembodied spirit still lived. The Lava Men were able to transfer said spirit within impenetrable mystical armor. Grotesk the Lava Men against the X-Men in San Francisco. Pixie attempted to teleport through his armor's force field and was almost killed. Nightcrawler noted that his own powers were not mystical in nature. He easily teleported through Grotesk's force field and removed the helmet of the villain. With his armor open, the spirit of Grotesk dissipated.[8]

An intuitive genius with a mechanical aptitude, Grotesk was frequently limited by his overriding hatred of humanity. He nonetheless could design technology to harness electrical storms and transfer their power in usable form to other artifacts, such as the Living Rock. He could operate Deviant-designed technology with great proficiency.

Like this? Let us know!
Retrieved from "https://marvel.fandom.com/wiki/Gor-Tok_(Earth-616)?oldid=6470023"
Community content is available under CC-BY-SA unless otherwise noted.