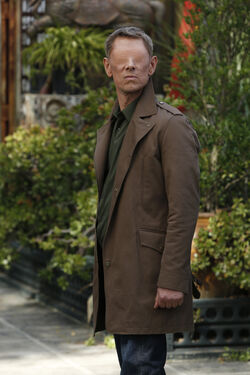 It's okay, beautiful. I'll show you the way.

Gordon was a member of the Inhumans, who underwent Terrigenesis in 1983. As a result of his transformation, his face changed to a visage of unbroken skin where his eyes once were and he developed teleportation abilities. Another Inhuman, Jiaying, helped him get control of his powers.[1]

In 2008, Gordon, accompanied by Jiaying, went to Bahrain in search of Eva Belyakov, an Inhuman with superstrength who stole Terrigen Crystals for her daughter, Katya, whom Jiaying deemed too dangerous for Terrigenesis. Katya developed the abilities to siphon the emotions and mind-control the people she comes into contact with. S.H.I.E.L.D. arrived before they did, but the squad fell under Katya's control. Gordon and Jiaying arrived during the aftermath, in which Agent Melinda May was forced to kill Eva and Katya.[2]

After two others underwent Terrigenesis in 2014, Gordon let the other Inhumans know he would take care of finding them. He found one of them, Raina, attempting to commit suicide by walking across a busy highway and surrounded by heavily armed agents. Gordon grabbed her and promised her he would show her the way before teleporting away with her.[3][1]

Gordon later abducted Cal during his confrontation with S.H.I.E.L.D. He locked him up in the same room where he had been trained. Gordon explained Cal that he was taken in because he was drawing too much attention, while reminding him that he was not an Inhuman, and his fate would be decided by his superiors.[4]

Gordon later tracked down Skye at her safehouse, the Retreat, where Phil Coulson had stashed her to keep her newfound powers from harming others. He offered to take her to the other Inhumans to learn how to control her powers and departed her company to let her think on her decision. Later on, when Skye was being pursued by S.H.I.E.L.D. agents loyal to Robert Gonzales, Gordon answered her call for help and teleported her to safety.[5]

Gordon brought Skye to the Inhuman sanctuary of Afterlife, where she remained unconscious for two days while taking acupuncture, and left her with Lincoln Campbell. When Skye as to the whereabouts of her father and Raina, Gordon declined to answer. He then visited Cal in the middle of one of his tantrum, at which the latter deduced that Skye was in Afterlife and demanded to see her, to which Gordon refused. Cal attempted to attack Gordon but the teleporter was able to subdue him and berated the man over his anger issues. Gordon later brought Jiaying before Cal, who confirmed that Skye was their daughter Daisy but again refused his request to see her.[6]

Gordon later tended to Raina, who was cynical about her hideous appearance. Gordon tried to comfort her and offered to be her guide to understand her gifts.[2]

Teleportation: Ability to teleport himself, the clothes he is wearing, and within limits a certain amount of additional mass which is in contact with him, such as a person.

Blindness: As a result of his Terrigenesis, Gordon has no eyes, leaving him conventionally sight blind.

There was speculation about Gordon being a counterpart to blind Inhumans Reader or Videmus, before his comics counterpart was introduced in Uncanny Inhumans #0.[7]

Like this? Let us know!
Retrieved from "https://marvel.fandom.com/wiki/Gordon_(Earth-199999)?oldid=6074232"
Community content is available under CC-BY-SA unless otherwise noted.