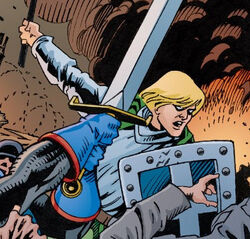 The Silver Squire was a member of the Freedom's Five, the costumed heroes who fought against the Germans during World War One. The Squire was a British child or teenager who acted as a sidekick or apprentice to Sir Steel.[2]

Nothing more is known about the Squire, however, including whether he was superpowered or not, and what happened to him after World War One ended.

There was apparently a Silver Squire named Clarence Armatage, who was injured during WWI, but it is unclear whether that was an alias or another person.[3]

The Silver Squire was a fine hand-to-hand combatant and wielded a shield and mace.

There has been speculation that the Silver Squire was an ancestor of Templar of the First Line, though this has never been proven.

Like this? Let us know!
Retrieved from "https://marvel.fandom.com/wiki/Gordon_Dare_(Earth-616)?oldid=5742773"
Community content is available under CC-BY-SA unless otherwise noted.