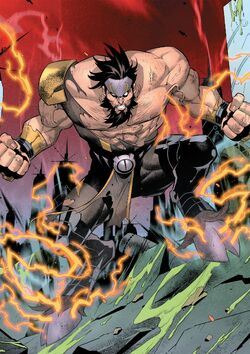 Hair
Brown
Unusual Features
Gorgon resembles a human, but with hooves instead of feet. Formerly, after undergoing Secondary Terregenesis, Gorgon had gained a monstrous appearance, his whole body covered in fur and his face more like that of a lion, and he has gained fanged teeth and claws.
Origin
Origin
Inhuman subjected to the Terrigen Mists while still an infant
Reality
Earth-616
Place of Birth
Island of Attilan, Atlantic Ocean
Creators and Appearances
Creators
Stan Lee, Jack Kirby
First Appearance
Fantastic Four #44
(November, 1965)

I am Gorgon Petragon! I have crushed armies and Gods! I have devoted my entire life to honing the warrior's craft. I have sacrificed everything fighting for my people's future! My loves --- my children --- my body! And for what, for what?! Because I have to believe in something greater than myself.

Gorgon Petragon was an Inhuman and the son of Korath and Milena, members of the House of Agon, the royal family of the Inhumans. He was cousin to Blackagar and Maximus Boltagon.

Exposed to Terrigenesis, he developed a physical mutation in the form of hooves, along with the ability to create kinetic shockwaves.[3]

When Black Bolt, Medusa and Maximus fled to the humans' world after an Alpha Primitives' insurrection, Gorgon was challenged into a contest to serve as viceroy in the stead of Kadlec the Seeker who was sent to retrieve the sons of Agon. Gorgon was taught by the Unspoken some advises on the ways to rule.[3]

Gorgon fell in love with, and eventually married, a woman named Myrra and had children with her. Myrra eventually died, leaving Gorgon with an everlasting pain inside him.[4]

He had a daughter, Alecto -- unknown if Myrra was the mother -- then, from another mother, a son, Petras Petragon.[5]

He was sent by their one-time leader, Maximus, to find Medusa and return her to Attilan. Gorgon found her outside the Fantastic Four’s Baxter Building in Manhattan and attacked her and the Human Torch, whom she had captured to help her escape. He used his powerful legs to climb the side of the building, hurt Mister Fantastic when he reached out to see who it was, and stole their helicopter after kicking their Fantasti-Car and Pogo Plane, thus disabling their transport. He chased Medusa and the Torch to New York’s State University where he confronted an escaped Dragon Man, who protected Medusa from him.[6] He continued to fight the Dragon Man, then the rest of the Fantastic Four, until the android created enough of a distraction for him to escape to the Inhumans' hideout with Medusa.

There, he discovered the Human Torch alongside his cousin, Crystal, who believed Johnny to be a fellow Inhuman. Gorgon and Triton then attacked the Torch until he escaped through the roof to alert the rest of the Fantastic Four.[7] Together, the Inhumans, led by Black Bolt, battled with the four, until Crystal announced that Triton had been taken by the Seeker, who had been sent to bring them all back to Attilan. Black Bolt then commanded Lockjaw to transport them, and they disappeared off the rooftop, with the Torch and Crystal trying to stay together, but being torn apart.[8]

They appeared back in Attilan, where Maximus explained that he had had Gorgon bring Medusa back to be his queen. Gorgon apologized and claimed ignorance of his motives. Then, Maximus taunted Black Bolt about his stolen crown until Black Bolt tore it from his hands by force, reclaiming the leadership of the Inhumans. But soon the Fantastic Four appeared, having followed the Seeker back to the refuge, and argued with Black Bolt, telling him that he and the Inhumans should rejoin the human race. While they discussed it, Maximus set off his atmo-gun, with the intention of destroying all the humans on Earth.[9] When it failed to work, as evidenced by the Fantastic Four’s survival, Medusa deduced that it proved the Inhumans were of the same race as humans. This infuriated Maximus, and he reversed his machine, creating a Negative Zone around Attilan that trapped the Inhumans inside, while the Fantastic Four narrowly escaped.[10]

Black Bolt later revealed his secret: that the use of his voice released destructive energy, and he was forced to use it to destroy the barrier surrounding Attilan. The Council of Elders then decreed that the royal family should split up and explore the human world.[11]

Sometime later, after the Terrigen Crystals were stolen by Quicksilver and then confiscated by General Demetrius Lazer, Gorgon led a sleeper cell in an ill-fated attempt to force the humans to return them. Captured by S.H.I.E.L.D., he was forced to undergo Secondary Terrigenesis, an effort by S.H.I.E.L.D. to determine that the mists could be classified as a weapon of mass destruction, which turned made him more monstrous.[12]

While Maximus was in control of Attilan, Black Bolt was taken by the Skrulls and replaced with a Super-Skrull sleeper agent. After this Skrull was revealed Gorgon was suspicious of other Inhumans, even those in the Royal Family such as Karnak. When the Skrulls landed a ship close to Attilan and attacked, Skrulls hidden among the Inhumans also entered the fray, though Karnak was not among them. Gorgon and the rest of the Royal Family, save for Maximus, then went to rescue Black Bolt from the Skrull Battleship Ryb'ik where he was being experimented on in an attempt to create a powerful weapon with which to destroy Attilan.[13]

When the Inhumans decided to leave Earth and go take over the weakened Kree Empire, Gorgon appeared to have gained control of his new form. He led the assault against the Kree defenses, and led the Kree forces against the Shi'ar in the War of Kings.[12]

Gorgon joined the diplomatic mission created by Queen Medusa to oversee diplomatic relations and handle the recovery efforts of people unexpectedly transformed into Nuhumans,[14] a byproduct of the Terrigen Mists that were released by Black Bolt into the atmosphere many months earlier.[15] Gorgon was then unable to walk since Lineage shot him in the spine when he betrayed New Attilan, and was thus confined to a specialized wheelchair. Still overseeing the mission with his fellow Inhumans, Gorgon continued his adventures while training every Nuhuman sent his way.

Be it rescuing a latent healer named Ash Minnick from a fanatical mob,[14] suffering from reoccurring nightmares caused by an immaterial passenger. Who, like many Nuhumans in the nation of Sin-Cong, was a victim of a fascist regime run by a paranoid dictator with a supreme hated for foreign change set out for revenge against him and his imperium using the diplomatic envoy's R.I.V transport.[13]

Investigating the strange appearance of the Skyspears in Jinchang, China; while also studying the unusual effects it has on the Inhuman populous. While also training the new recruits in the use of their powers (some using them without his knowledge),[12] And eventually heading to the mysterious lands of Utolan deep within the terrains of the Chimanimani Mountains of Africa. Searching, under the unanimous tip given to the mission by Ana Kravinoff, for the missing inhuman clan that Jaycen's missing family is apart of. Which kicked off a near-genocide of the hidden community by some of its more radicalist factions within their tribe attempting them to the fatal process of Terrigenesis.[16]

While observing his comatose son within their mobile home base, Ash revealed to Gorgon she had been using her powers to heal his spinal nerve over time, enabling him to walk again. Still unsure whether or not he deserved it, Gorgon stood on his own for all to see at Crystal's surprise birthday party, with everyone present happy to find out that since the process worked on him, Ash would begin working on his son.[5]

Following the destruction of the Terrigen Cloud and thus of any trace of Terrigen at all,[17] the Inhumans feared their race as it was would come to an end with no substance to kick-start any more Terrigenesis. The alternate reality Kree warrior Marvel Boy revealed the Inhumans that a way to overcome this obstacle could result from a journey that started by visiting the ruins of Hala. Gorgon joined the exploration crew so to watch Medusa's back.[18] During the journey, Gorgon and Medusa demonstrated their latent romantic feelings for each other.[19]

This journey led Noh-Varr and the Inhumans to encounter the Progenitors, an eons-old race which had created the Kree in the same way the Kree had created the Inhumans, with the use of a substance called Primagen. The crew found themselves attacked by the Progenitors when they arrived to their World Farm.[19] After finding a deposit of Primagen, the explorers attempted to escape with some of it. Gorgon decided to stay behind to buy the crew enough time to escape, using a sample of Primagen to boost his powers and make a last stand against a horde of pursuing Progenitors. Gorgon destroyed the planet where they were standing with his boosted abilities.[20] While the rest of the Inhumans left him for dead,[21] Gorgon had survived the power boost.[22]

Gorgon possesses a variety of superhuman physical attributes as a result of a combination of his unique heritage and exposure to the Terrigen Mist on two separate occasions.

Superhuman Strength: Gorgon is superhumanly strong, more so than most other Inhumans, and was previously capable of lifting at least 40 tons, though it's believed he can handle more. His current strength since undergoing Secondary Terregenesis is unrevealed, but the upper limit is presumed to be exponentially higher than it was previously. It is believed since his secondary terragenesis, that Gorgon is able to lift anywhere between 80 to 100 tons.

Superhuman Speed: Gorgon is capable of running and moving at speeds greater than even the finest human athlete.

Superhuman Stamina: Gorgon's musculature produces less fatigue toxin during physical activity than the musculature of a human. He could previously physically exert himself at peak capacity for several hours before fatigue begins to impair him. His current stamina is unknown, but it takes a liter of tiletmine to keep him unconscious, and this dosage must be given hourly in order to be effective, so his stamina is much higher.

Superhuman Agility: Gorgon's natural agility, balance, and bodily coordination are enhanced to levels that are beyond the natural physical limits of the finest human athlete.

Superhuman Reflexes: Gorgon's reaction time is enhanced to a level that is beyond the natural physical limits of the finest human athlete.

Superhuman Durability: The tissue of Gorgon's body is somewhat harder and more resistant to injury than those of a human being. Gorgon can withstand impact and blunt trauma forces that would cripple or kill a human being and suffer from only mild discomfort. However, Gorgon is not invulnerable and can be injured in ways similar to a human. For instance, he can be hurt by weapons composed of conventional materials.

Regenerative Healing Factor: Gorgon, if injured, is capable of healing somewhat faster and more extensively than a human being can. His recovery time from physical trauma is about twice that of a human.

Kinetic Shockwaves: Gorgon's legs are thickly muscled, allowing him to do massive damage by kicking something or someone, or he can use them to create seismic shocks by stomping the ground with his hooves. As a result, Gorgon can generate shockwaves with a strength of 7.5 on the Richter Scale, or 9.5 if near a fault line.

Primagen Boost: After exposing himself to Primagen, Gorgon's powers were greatly enhanced, giving him the ability to break in half an entire planet with a stomp.[20]

Gorgon is a formidable hand to hand combatant.

Unknown, though at least 40 tons.

Like all Inhumans, while being physically superior to humans in most respects, Gorgon's resistance to diseases and recovery time from diseases is slower than that of a human. Since undergoing Secondary Terrigenesis, Gorgon's intelligence has been compromised.

Like this? Let us know!
Retrieved from "https://marvel.fandom.com/wiki/Gorgon_Petragon_(Earth-616)?oldid=6500087"
Community content is available under CC-BY-SA unless otherwise noted.