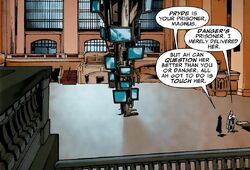 Jean Grey was escorted to the Grand Central Station by Warren Worthington III.[1]

Peter Parker picked up Aunt May at the newly constructed Penn Station, telling him that Mrs. Watson invited her to move in, which worked since Peter wanted to move out too, into Harry's new apartment.[2]

Speedball and Niels met Timeslip at the Grand Central Station, one of New York City's most spectacular entry points.[5]

Hawkeye and Deadpool once drove a car through the station and down into the subway tunnels while trying to catch Captain Barracuda's submarine before it departed.[6]

The Grand Central Terminal was chosen by Mister Negative to be the place where he and his Demons Gang would release the deadly viral agent created by Oscorp, Devil's Breath in an attempt to frame Norman Osborn for the incident. The plot was later discovered and prevented by Mary Jane Watson and Spider-Man.[citation needed]

When the Hulk almost decapitated Giant Man, Iron Man grabbed the green monster and slammed him into the recently deserted Grand Central Station. There, the Hulk tore off Iron Man's helmet and threatened to eat Tony Stark. However, Iron Man activated a thought scrambler and knocked him out of the building.[7]

Although almost universally referred to as Grand Central Station, it is officially and correctly named Grand Central Terminal, as trains do not travel past the station, only arrive at and depart from it.

Like this? Let us know!
Retrieved from "https://marvel.fandom.com/wiki/Grand_Central_Station?oldid=5868910"
Community content is available under CC-BY-SA unless otherwise noted.