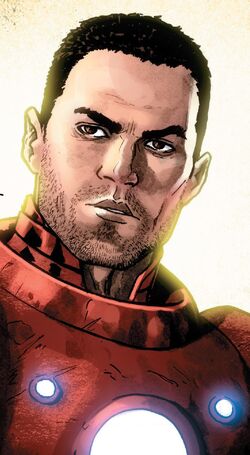 Grant Ward was a top agent at S.H.I.E.L.D.. He worked closely with Phil Coulson.[1]

Not long before the super-human civil war,[note 1] Ward and Coulson came up with a plan to infiltrate Gorgon's Hydra. S.H.I.E.L.D. director, Maria Hill, skeptically approved it, and Ward soon joined the lower ranks of the organization.

Six months into the operation, Ward shielded Gorgon from a repulsor blast during a confrontation between Hydra and the Avengers. The fight had been staged, as Iron Man had even recalibrated the blast to prevent Ward from experiencing severe damage at the moment of taking the shot. This apparent act of loyalty allowed Ward to gain the Gorgon's trust and he was promoted to the rank of lieutenant.[1]

However, Ward's new position allowed him to learn the Gorgon's true agenda and Grant found himself agreeing with his ideals. Thus, during a debriefing with Maria Hill and Coulson at the S.H.I.E.L.D. Helicarrier, Ward showed his new allegiance by shooting Hill and fleeing. Hill's life was spared because she had remained skeptical of Ward, and had sent a Life-Model Decoy in her place.[2]

When the designs of Iron Man's armor were leaked, Ward used an counterfeit suit to break into the Pentagon and steal a Quantum Drive.[3] He then used the intel stored on it to kill the Madripoorean vigilante Horus, recording everything as part of an advertisement of an auction for the drive, to assure potential buyers that the contents on the drive were legit.[4]

After the drive had been sold in an auction to an operative of the Pentagon itself, John Walker, Ward pursued his motorboat – only to find Phil Coulson on board, but no Quantum Drive which had already been retrieved by S.H.I.E.L.D..[5] Ward abducted Coulson, as well as Lola Daniels, a mind-reader, and forced her to extract the Axiom Protocols information from Coulson's brain as she had initially done to create the Quantum Drive. Ward subsequently used the information to send somebody to neutralize Spider-Man in Shanghai in order to verify the new Coulson Protocol's efficacy. With the money of the auction of the original protocols, Ward and Hydra built an army of counterfeit Iron Man suits.[1]

Hydra sent numerous soldiers in the Iron Man armor loaded with the Axiom Protocols to neutralize numerous heroes, but S.H.I.E.L.D. thwarted the initial attacks. The armor of one of the defeated soldiers was used to triangulate the location of their base. Meanwhile, Coulson had managed to escape from his cell and confronted Ward. The confrontation soon escalated to an all-out battle when reinforcements arrive for both parties. Once Hydra's forces had been defeated, Ward tried to escape using Lola Daniels as leverage. She struggled to break free from Ward's grasp, prompting him to kill her. Ward was subsequently subdued and imprisoned.[2]

Shortly after Elektra Natchios rejoined S.H.I.E.L.D., she reinstated Ward as an agent of S.H.I.E.L.D. To make sure he remains loyal, Elektra attaches an explosive collar to his neck.[6]

Like this? Let us know!
Retrieved from "https://marvel.fandom.com/wiki/Grant_Ward_(Earth-616)?oldid=6082457"
Community content is available under CC-BY-SA unless otherwise noted.