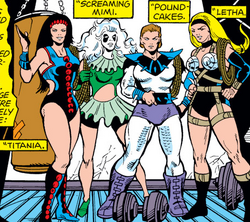 Ann Fraley, as Auntie Freeze, was one of the leading female wrestlers of thirty years ago. After two decades in the ring, Fraley retired from professional wrestling to become a trainer of other female wrestlers. She managed her proteges, Helen Feliciano, alias Letha; Davida DeVito, alias Titania; Marian Pouncy, alias Poundcakes; and Melissa "Mimi" Schwartz, alias Screaming Mimi; to become the wrestling team known as the original Grapplers.[1]

The original Grapplers became renowned for their colorful personalities and ringside antics, but despite Auntie Freeze's tireless promotion of her four proteges, the wrestling federation denied them the opportunity to make the amount of money their male counterparts made.[2]

Titania, the leader of the team, was contacted by a representative of the Roxxon Oil Company in charge of covert operations whose identity has not yet been revealed but who happened to be a wrestling fan. This representative offered the four the opportunity to earn supplementary income by performing a covert operation for the corporation. The four agreed and were given special paraphernalia to assist them in their mission. The four were sent to accompany the woman warrior Thundra in invading Project: Pegasus, a federal government energy research project. Roxxon warned a monopoly on major research into tapping new energy sources. Therefore, following orders from. Roxxon, once the four Grapplers were inside the Project, they began sabotaging and destroying equipment there. However, the mission failed due to the Project's then-security chief Quasar, and the four Grapplers were tried and jailed for their misdeeds.[3]

The four Grapplers were sent to the prison at Ryker's Island. Eventually, they became the leaders of the other women prisoners there and virtually ran the women prisoner's area at night. However, they were overpowered in battle by the mutant hero Dazzler when she was imprisoned there for a night.[4]

When the Grapplers were finally paroled, they discovered that the women's wrestling movement had lost its momentum without them. The Grapplers undertook certain petty crimes to support themselves, and at one point made an unsuccessful attempt to take revenge on the hero the Thing, who had helped thwart their mission at Project Pegasus. The Grapplers were never caught and imprisoned during this time.[5]

Auntie Freeze, in the meantime, was scouting out new candidates for female wrestling stardom and succeed in finding several promising ones. When wrestling promoter Edward Garner organized the Unlimited Class Wrestling Federation for the increasing number of wrestlers who were barred from other wrestling associations because of their superhuman strength, Auntie Freeze contacted him to arranged for the formation of a women's division. Auntie Freeze, like many of the managers and trainers of male wrestlers, was contacted by Power Broker, Inc., an agency which promised to augment an individual's strength to very high levels for a very high price. Auntie Freeze sent all of her new clients as well as the original Grapplers to the Power Broker to undergo treatment. Thus, the Grapplers were given superhuman powers. The original Grapplers had by now returned to being managed by Auntie Freeze. The four original members and Fraley's new female wrestlers were now collectively called the Grapplers and were legitimate professional wrestlers in the UCWF. The original Grapplers resented the newcomers to a certain extent, but were mostly pleased by now being able to earn money without having to resort to crime.[6]

Over time, membership of the Grapplers were shaken slightly. Titania lost a bout for leadership of the Grapplers to the newcomer Battleaxe, and was soon after was slain by the enigmatic villain Scourge, disguised as a woman wrestler named Golddigger.[7] Scourge also killed Letha, who was searching for a way to avenge Titania's death.[8] Screaming Mimi was contacted by Baron Zemo to join his version of the criminal team Masters of Evil[9], a path which would lead her to eventually become a founding member of the Thunderbolts as Songbird.[10]

Equipment: On the mission to invade Project P.E.G.A.S.U.S., Letha wore special sonic plugs in her ears so Screaming Mimi's wave frequecy was filtered out. Presumably other members of the Grapplers aslo wore these ear plugs. [11]

Retrieved from "https://marvel.fandom.com/wiki/Grapplers_(Earth-616)?oldid=5572617"
Community content is available under CC-BY-SA unless otherwise noted.