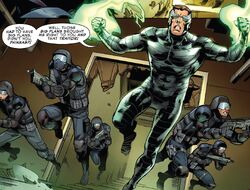 One of Gray Blade's operations, named "Project Twlight," consisted of an exhaustive plan to take down both superheroes and supervillains.[2] S.H.I.E.L.D. apprehended the Tinkerer not long afterwards, and he offered to feed the organizaton technical information on super-humans. The Gray Blade stepped in due to Project Twilight, and had the Tinkerer give them the data.[3]

After discovering of Project Twlight's existence, agent Teresa Durand deleted all of its archives and went on the run with the only back-up injected into her bloodstream through a series of nanobots.[1] In order to discredit Teresa, Mintz had his agents take a photograph of her with Spider-Man, and contacted different news outlets to label her as a traitor of country.[2] Due to Spider-Man's connection with Peter Parker, Mintz decided to arrest him to get to Durand.[4]

A unit of Grey Blade agents raided Peter Parker's apartment, but he managed to evade capture and changed into Spider-Man. However, Agent Mintz managed to get the drop on him. He was saved by J. Jonah Jameson, who ran Agent Mintz over with his car. Since Gray Blade decided to arrest Peter's Aunt May after he had evaded capture, Peter turned himself in to let her go.[5] Corben interrogated Peter to no avail, and while waiting for him to cooperate, Parker was rescued by the Human Torch and Agent Durand.[6]

Agent Mintz led the way when the Gray Blade attacked the Tinkerer's hideout, where he had captured Agent Durand and was exctracting the data from her body. Spider-Man came to the rescue, and stopped the Tinkerer from crushing Agent Mintz. Shortly afterwards, Spider-Man's ally Betty Brant destroyed the comptuer storing Project Twlight's data. After the Tinkerer escaped, the heroes prepared to arrest Agent Mintz, since Brant had recorded Mintz adimittion to his alliance with Tinkerer. However, when a fleet of the alien Vedomi arrived to Earth, Spider-Man joined forces with Mintz to interrogate the Tinkerer about them, since he had known about their arrival.[3]

Like this? Let us know!
Retrieved from "https://marvel.fandom.com/wiki/Gray_Blade_(Earth-616)?oldid=5628650"
Community content is available under CC-BY-SA unless otherwise noted.