This page presents the interleaved events of the Great Flood, Atlantis and Lemuria's destruction, and the Second Host of the Celestials on Earth. 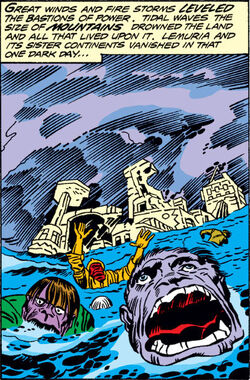 Many events have been listed as reasons for that Cataclysm:

The Celestials destroyed most of the Deviants, and their stronghold of Lemuria, causing it to sink below the ocean,[36] which also caused the sinking of Atlantis and Lemuria.[37]

The event kickstarted the myth of Noah's Ark because of the surviving group of Eternals and humans led by Utnapishtim on his Ark to escape the flood.[37][verification needed]

Once the flood went away, Yahweh allegedly put a rainbow in the sky as a promise to the survivors (that survived in an ark) that he would never again smite every living thing on Earth.[32][15]

The cataclysm that destroyed Atlantis was caused by the Tan-Ed-Drul.[38]

Retrieved from "https://marvel.fandom.com/wiki/Great_Cataclysm?oldid=5838185"
Community content is available under CC-BY-SA unless otherwise noted.