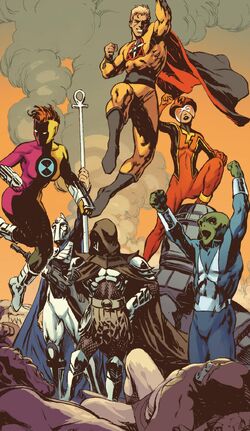 They saved the world and were lifted up as saviors. Their home was a temple--a monument erected for The Science Games. A tower pointing towards the stars, and possibly something beyond even that. They were the greatest heroes their world had ever seen. They should have been enough.

The Great Society was a team of super-humans who came together to fight off the alien invaders that had occupied their planet. They were formed four years after the previous superhero team of their world, the Archetypes of J.U.S.T.I.C.E., fell in combat.

The Great Society defended their world from all manner of threats, and eventually became aware of the Incursions. They swore to stop the incursions without bloodshed, managing to save their world from destruction by averting the incursions bloodlessly.[1] One of the methods they utilized was the Wishing Box, with its 6 planes of forever glass, to manipulate reality at the cost of destroying the box itself.[2]

After facing and defeating an Incursion by the Mapmakers, the Great Society faced yet another one immediately after, this time facing the Illuminati of Earth-616.[3]

The Great Society no longer had the means to stop this Incursion bloodlessly like they had before, nor did the Illuminati, who informed them of their last resort being an anti-matter bomb to destroy one of the Earths. The Illuminati tried to convince them to work together in finding a way out of the situation before succumbing to the worst-case scenario. Rider however was mistrustful of the Illuminati's intentions, prompting Namor to attack Rider in the belief that a fight to the death was the inevitable conclusion, beginning the battle for the fate of their worlds.[2]

The Great Society initially took the upper hand, but Doctor Strange turned the tide by unleashing an eldrich creature which killed most of the Great Society and fatally injured Sun God. As the Illuminati were leaving this Earth, having set the anti-matter injector to detonate, Zoran begged them not to destroy his Earth. Black Panther offered to take him with them, but he refused, preferring to die on his Earth with his friends.

With ten minutes left until the Earths collided, Namor activated the anti-matter injector from his Earth and destroyed the Great Society's world.[4]

Like this? Let us know!
Retrieved from "https://marvel.fandom.com/wiki/Great_Society_(Earth-4290001)?oldid=5710408"
Community content is available under CC-BY-SA unless otherwise noted.