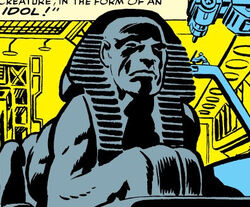 The Great Sphinx, is a limestone statue of a Sphinx that stands on the Giza Plateau on the west bank of the Nile in Giza, Egypt The face of the Sphinx is generally believed to represent the face of the Pharaoh Khafra.

In a the possible future of Earth-6311; The Great Sphinx of Giza was constructed by the Time Traveling Rama-Tut as a disguise for his Time Ship.[1]

After his initial defeat by the Fantastic Four, Rama-Tut abandoned the Sphinx when he fled into the time stream. As he left, he triggered a booby-trap that destroyed all trace of his advanced technology within the Sphinx.[1]

The Hulk on a mission to stop the Chronarchists arrived in Ancient Egypt. Now in the form of "Mr Fixit" he used his "Tommy Guns" to shoot at Sandman, destroying the Sphinx nose.[2]

The Great Sphinx once came to life where it drove away a group of alien invaders.[3]

In front of the Sphinx, Thor battled against Hyperion and managed to defeat him by using his enchanted hammer Mjolnir to shrink Hyperion in size and trap him a sphere of glass.[4]

The alien Horusians, having "seeded" the Sphinx with their advanced technology during the Pharaohs' ages, later tried to use the Sphinx in a gladiatorial combat against the Colossus, but Bruce Banner stopped the Sphinx when it started to move.[5]

Like this? Let us know!
Retrieved from "https://marvel.fandom.com/wiki/Great_Sphinx?oldid=6432810"
Community content is available under CC-BY-SA unless otherwise noted.