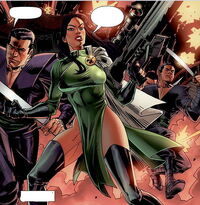 Base of Operations
unspecified headquarters in Asia
Affiliations

Origin
Split from the Atlas Foundation when Suwan was not allowed to ascend to the leadership of Atlas because she was female.

The Jade Claw became the commander of the Atlas forces in the East, letting the Golden Claw focus on the West. The Horde in China became loyal to her and when he ordered her to step down, they rebelled.[2] She formed the Society of the Great Wall using a fraction of the loyal Horde. With it she took back most of the Asian territories which had been lost in the previous centuries. Business and government leaders now had to consider and answer to the Jade Claw.[3]

In addition to her legions of followers in the Great Wall, she controlled parts of the Chinese military, resulting in a force which outgunned and outmanned the forces of the Atlas Empire by ten times.[4] The organization had at least 312 bases spread across the world and a network of satellites which it controlled.[5] The Jade Claw had her forces execute a global campaign against the Atlas Empire and took out all of its bases as well as its tactical air and naval footholds.[1]

Led by Jimmy Woo, Atlas used the Dragon's Corridor to launch a counter-strike to the Great Wall's mountain base in China. A battle ensued between the forces of the Great Wall and a tank division of the Chinese Army on one side and the forces of Atlas and the Atlantean Army on the other side. Which ended in victory for Atlas and the surrender of the Jade Claw. Rather than have her execute per custom, Jimmy Woo allowed her to live and continue to help the Great Wall in its endeavors but with Temujin as head of the organization.[1]

Retrieved from "https://marvel.fandom.com/wiki/Great_Wall_(Earth-616)?oldid=5590299"
Community content is available under CC-BY-SA unless otherwise noted.