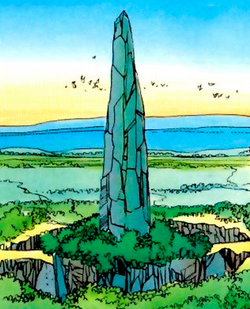 The Green Chapel, located to the south of the isle of Avalon,[1] is the home of the Green Knight and the stronghold of the Pendragons.[2] It is said to be the source of all elemental energy in Avalon.[3]

The Chapel houses many of Avalon’s most powerful magical talismans such as the Amulet of Right, the Sword of Might and the Holy Grail.[4] The tower is hundreds of feet high and apparently a natural rock formation; however, the entire structure seems to be alive.[3] The Chapel is guarded by skeletal warriors,[3] and a round table inside the Chapel is destined to the so-called Knights of Pendragon.[2]

The Green Chapel was destined to be the resting place of King Arthur after his mortal death in the Earth realm. Although Arthur’s body was stolen by the Nethergods,[5] his empty coffin remains in the Green Chapel.[6]

Mostly recently, the appearance of the Green Chapel changed from that of a rocky tower to a literal, small chapel;[4] however, when last seen, the Chapel’s original appearance had been restored.[7]

In modern times, the Red Lord and his Bane marched towards the Green Chapel leading the assault against the Green Knight and his Pendragons. After an intense battle, the forces of the Red Lord were forced to retreat.[8]

The Skrulls also attempted and succeeded in storming the Green Chapel after incapacitating the Green Knight. The Skrulls stole many of Avalon's magical talismans in hopes to reclaim all of magic for themselves.[4] Their plans were foiled by Captain Britain, and the sacred items returned to the Chapel.[9]

The Green Chapel recently became the target of the Manchester Gods during their war against the Lords and old gods of Otherworld. The Manchester Gods hoped to weaken the old gods' hold over Otherworld by destroying their places of power; however, the Green Knight fiercely defended his Chapel.[7]

Like this? Let us know!
Retrieved from "https://marvel.fandom.com/wiki/Green_Chapel?oldid=5874625"
Community content is available under CC-BY-SA unless otherwise noted.