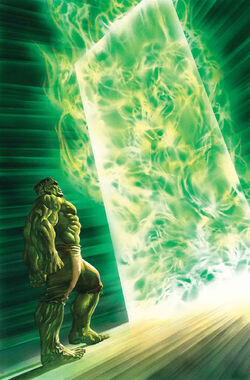 The Green Door is a metaphysical barrier that connects the Below-Place, the bottom layer of the Multiverse even below the deepest layer of Hell, to the real world. After death, the souls of gamma mutates cross into the Below-Place through the Green Door. They are then capable of returning to life when another Green Door manifests for them, though they possess no memory of this following their resurrection.[1][2] The first Green Door was opened in the Los Diablos Missile Base in New Mexico due to the detonation of the Gamma Bomb built by Bruce Banner, which caused his death and his subsequent resurrection, and transformed him into the Hulk.[3]

Through a Green Door, the One Below All is able to exert its influence on gamma mutates, albeit it needs a host personality to act through. It eventually found one in the form of the soul of Bruce Banner's father Brian, who was plunged into the Below-Place after death.[4] Using Brian as a conduit, the One Below All began to possess and manipulate gamma mutates for its own goal, that to destroy everything and become the sole presence in the Multiverse.[5] After possessing the Absorbing Man, the One Below All used him to soak up all of the ambient gamma radiation left in the Los Diablos Missile Base, and opened a Green Door into the Below-Place.[6] The Hulk and Bruce were split apart, and Brian attempted to turn Bruce into the new vessel for the One Below All, but the plan failed and the Hulk managed to merge back with Bruce and close the Green Door, returning to Earth.[7]

When he put into motion a plan to help the One Below All bring forth a future in which he succeeded in his plan, the Leader used his occult knowledge to open a Green Door into the Below-Place, where he assimilated Brian Banner and became the One Below All's new host.[5] The Leader began to use Green Doors to take control of Rick Jones,[8] Del Frye[9] and partly the Hulk himself.[10] The Leader also demonstrated the ability to alter a mutate's Green Door, changing it into a Red Door to prevent their resurrection, as he did with Leonard Samson's Green Door when it manifested while he was in the Below-Place.[9]

Like this? Let us know!
Retrieved from "https://marvel.fandom.com/wiki/Green_Door?oldid=5779894"
Community content is available under CC-BY-SA unless otherwise noted.