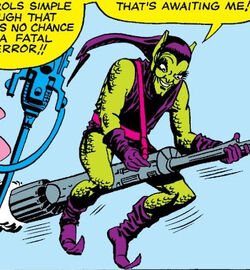 The method of flight utilized by the Green Goblin in his first appearance. He later discarded it in favor of a Goblin Glider.[1]

Two incarnations of Jack O'Lantern -- the Savage Six's Jack O'Lantern and an unnamed criminal who assumed the identity after his death -- have used a rocket-powered flying broomstick as well, featuring remote controlled capabilities similar to later Goblin Gliders.[2] However, whether this was derived from or otherwise related to the Green Goblin's Flying Broomstick is unknown.

Like this? Let us know!
Retrieved from "https://marvel.fandom.com/wiki/Green_Goblin%27s_Flying_Broomstick?oldid=6434251"
Community content is available under CC-BY-SA unless otherwise noted.