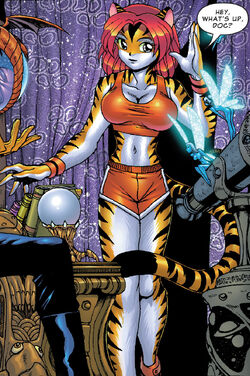 Greer was Doctor Strange's assistant/familiar, and was bound by a magical curse that kept her in were-tiger form until she completed a thousand good deeds. Called upon to help battle Mordo and his allies, the Sorcerer Supreme soon took his battle into orbit, leaving Greer to deal with Black Widow. While on Stark Island, she came across T'Challa in his Were-Panther form and became quite smitten with the hero.[1]

She was later killed by the Hand.[2]

Spear of Shamballah: A mystical spear gifted to Greer in order to fight against the Forces of Doctor Doom. Its exact properties are not explained, but it does give Greer the ability to fight hordes of robots on an even keel to the likes of Doctor Strange.[1]

Like this? Let us know!
Retrieved from "https://marvel.fandom.com/wiki/Greer_Grant_(Earth-2301)?oldid=5348694"
Community content is available under CC-BY-SA unless otherwise noted.