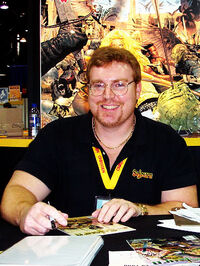 Brian Cronin of Comic Book Resources remarked that Land's art in Uncanny X-Men #510 is "possibly has the most harmful art to a story that I’ve seen in a comic," saying that the Land's limited supply of poses and use of the same models for multiple characters "results in terrible art and particularly terrible storytelling."[1]

Although the use of photographs as models is long established in comic book art, Land has been accused of going beyond the accepted bounds of photo use.[2] Land’s layouts and poses were so distinctive, detailed and repetitive that critics suspected that Land was lifting photos into his pages outright and using minimal Photoshoping to alter the picture and make the work appear an original drawing.[2] Land says that he does Google searches for references, but denies accusations that he does digital manipulations[3] which has since been proven untrue by various factors on the Internet, who have taken his pictures and post them over posters, movie stills, porno images, his own work and other comic book art to showcase that he has traced them indefinitely.

There are currently a number of people who have petitions and groups dedicated to have him fired by Marvel, though Joe Quesada had stated that he wouldn't fire him because it would be unfair to Land.


Retrieved from "https://marvel.fandom.com/wiki/Greg_Land?oldid=4679254"
Community content is available under CC-BY-SA unless otherwise noted.