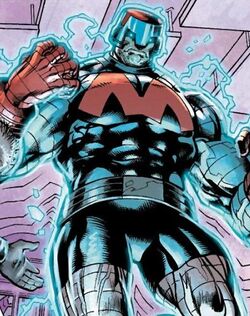 Industrial spy Gregory Nettles was trying to steal a new video game ("Megatak", from Nogari Corporation) at McCormick Place. Nettles assaulted a publicity man who was dressed as the video game character, and took his costume to get near the demo. He then tried to take away the circuitry from a video display exactly when the game was being turned on. Nettles was transformed by the electric energy and apparently absorbed in the game, mutated, and then regurgitated through the screen. Nettles became insane, believing himself to be Megatak, and used his new powers to bring characters from all the games to life. The characters, under Nettles' control, attacked the attendants.

Nettles did not know that the Asgardian goddess Sif was among the attendants. Sif battled Megatak's monsters. The battle was reported in radio news and Sif's lover Thor understood what was happening. Thor flew there to back her up, and reached McCormick as Sif was approaching Megatak. Sif allowed Thor to fight Megatak.

Thor resisted Megatak's electric attacks and then used his hammer to absorb electric energy from Megatak and throw it to space. Nettles was knocked down because of this, and seemingly lost his powers.[1]

Months later, in New York City, Megatak tracked down Sif and Beta Ray Bill. Just as they had finished a battle with the Titanium Man, Megatak prepared an attack on both Sif and Bill. Nevertheless, he was found by the Scourge of the Underworld who, disguised as a homeless man, shot and killed Megatak.[3] It is unclear whether he had regained his superpowers or not, however he was resistant to bullets in his previous incarnation.

Years later Megatak was revived, as well as many other villains killed by Scourge, by the Hood to join his criminal army.[4] He worked with the similarly revived Microchip to steal the digitized War Journal to get intel on Punisher and his new assistant Henry Russo.[5] He sent Blue Streak through the a computer monitor, sending the killer after Russo. Afterward Megatak was not seen again among Hood's Gang.

A few months later he was recruited along with his fellow resurrectees Death Adder and Human Fly as part of the group formed by Crime-Master known as the Savage Six.[6]

When Venom was infiltrating Crime-Master's hideout, Megatak almost killed him, but Toxin attacked the electronic giant from behind, ripping off Nettles' head because Toxin wanted to have the privilege of killing his "grandfather".[7] Megatek dissipated in an electric haze.

Megatak had "electrokinesis", allowing him to control electricity. He used it in the following ways:

He is able to travel through information lines such as to computers[5] and mobile phones.[8] He can track people through their electronics.[9]

Able to fight toe to toe with Thor.

Able to travel through computers and cellular networks.

Like this? Let us know!
Retrieved from "https://marvel.fandom.com/wiki/Gregory_Nettles_(Earth-616)?oldid=5857154"
Community content is available under CC-BY-SA unless otherwise noted.