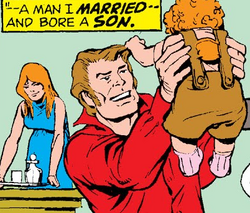 Gregory Russoff was a Transylvanian nobleman and Baron. Some thirty years ago, he married an American college student named Laura. Together they had two children, Jack and Lissa. Gregory however, was the keeper of a dark secret. For three nights out of every month, Russoff would seal himself inside of a tower room in his castle with instructions to never be disturbed. He told his young wife that he was studying. One evening however, a lightning storm swept through the Baltic nation and a stray bolt blasted a hole in the side of the tower. That same night, witnesses claimed to have seen a werewolf prowling the countryside. Several of the town elders visited Russoff Castle to inquire with the Baron, but when Laura inspected the tower room, he was nowhere to be found. Still later, a group of hunters, armed with silver bullets have cornered the werewolf and shot him. It was then that they discovered that the werewolf was actually the Baron. The curse of the Werewolf was passed on to Gregory's son, Jack, and even temporarily to Lissa.[1]

Laura would later marry Gregory's brother Philip Russell.[2] Laura and Philip had dated before he introduced her to Gregory. Jack and Lissa did not learn their step-father was their uncle until adulthood.[citation needed]

Typical powers of a Werewolf

Typical weaknesses of a Werewolf, including a weakness to silver.

Like this? Let us know!
Retrieved from "https://marvel.fandom.com/wiki/Gregory_Russoff_(Earth-616)?oldid=5298537"
Community content is available under CC-BY-SA unless otherwise noted.