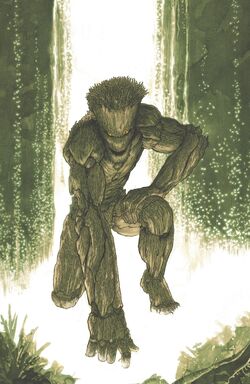 Groot was a Flora colossi from Planet X, the capital of the branch worlds. He did not get along with his fellow saplings, instead preferring the company of the "Maintenance Mammals" who the other saplings treated with prejudice. After Groot killed another sapling to defend a maintenance mammal it was brutalising, as well as releasing a human subject that was kidnapped for scientific purposes, he was exiled from the planet by the "Arbor Masters."[7][8] With no place to go, Groot set to explore other galaxies.[8]

Into his adulthood, Groot found himself in Kree space, where he was promptly captured and imprisoned. While in jail, he formed a rapport with Rocket Raccoon and was assigned to a covert ops team led by Starlord, whose goal was to assault Hala and defeat the Phalanx. His body was mostly destroyed, but a small twig of him split off, preserving him, traveling in the care of Rocket Raccoon, fitting easily in his hand or riding on his shoulder. Groot had fully regrown himself soon after their mission was complete.[9] Groot then continued to help Starlord and the others he had teamed up with to fight the Phalanx, once again sacrificing himself to save the others and regrowing from a twig.[10]

Groot joined Star-Lord's Guardians of the Galaxy, alongside many of those he had fought against the Phalanx alongside, including Rocket, though he did not at first fight alongside the team he was still regrowing himself.[11]

Groot and Rocket Raccoon were having a libation in a low-down dirty spacer bar in low-down dirty spacer space when they were accosted by a group of Badoon who attempted to arrest them for 'Crimes against the Royal Brotherhood'. A quick shootout ensued and Rocket created an avenue of escape by shooting holes in the beer barrels causing the saloon patrons to stampede for the free beer. The duo made a hasty exit and were soon rocketing away when they found themselves pursued by Badoon Attack Cruisers. Rocket ordered Groot to take evasive action while he went to boost the stardrive to allow them to escape. He found the stardrive compartment empty and the scene cut to a shot of the surprised Rocket with a cliffhanger closing credits and Mojo proclaiming "Best Pilot Episode Ever!"[12]

They then found themselves staring at an empty compartment where a stardrive should be and questioning why they were hearing voices like suddenly their lives just got a narrator. Their ship blew up and they appeared in space in combat space armor bewildered at what just happened and how they got there. They targeted their Badoon attackers forcing one of the pilots to eject. They squeezed into his craft and it began to plummet to an ice planet below. Mojo called for the scene to cut and hit the Bio-Stasis on his stars. He proceeded to plan for the next scene expecting to make enormous money on the show. In the background, Rocket's Timely Inc. Shipment Processing Device analyzed the situation and informed the duo they were caught up in an artificial dramatic construction. They blasted through a wall realizing they were in a "Flarkin' TV Studio" and were confronted by a hologram of Mojo who opened fire with real weapons.[13]

Groot and Rocket Raccoon were transported to the Mojoverse by the inter-dimensional TV producer known as Mojo. He had decided to use the pair in his latest reality television show. He recruited various criminals that the heroes had fought in the past. He placed the pair in scenarios where they would have to battle them again, however, if an innocent life form was caught in the crossfire, they would be killed in the process.[14] As the duo moved from one scenario to another, Mojo began advertising action figures with a collection pack that allowed buyers to assemble their own 12" Groot figure after collecting all five. The demand was so high, Mojo stood to make a fortune until the Timely Inc. Shipment Processing and Analysis Device decided to take control of the situation and held a B-00-M Meson Beam Gun to Mojo's face. It allowed the reality system to stop just long enough for the heroes to escape. They confronted and destroyed Mojo who was revealed to be a robot controlled by Major Domo.[15]

Return of the Guardians

Groot, along with the rest of his team, aided the Avengers in fighting the returned Thanos.[16]Thanos managed to get a Cosmic Cube from the United States Army, with which he escaped to Moord, the homeland of the Badoon. The Guardians arrived at the Avengers Tower and informed the Avengers about the situation. They joined the Guardians to fight Thanos and the Badoon.[17]

After Thanos apparently killed the Elders of the Universe, to impose his supremacy, he became one with the Cosmic Cube and killed the Avengers as well as the Guardians. But actually, they were sent to the Cancerverse along the Elders, there, Tony Stark found that Thanos' weapon wasn't actually a Cosmic Cube and that it had defects. They bargained with the Collector, in exchange of a weapon capable of deactivating the "Cube" and return to Earth, the Avengers and the Guardians would let Thanos to be defeated by the Elders. With the help of other members of the Avengers, Thanos was defeated and sent to punishment by the Elders.[18]

Soon after joining the Guardians on behalf of the Avengers as a liaison, Agent Venom started losing control of his symbiote. After it was taken from him by the Guardians as a precaution, the symbiote escaped confinement and bonded with Groot for a brief time.[6]

Together with the Guardians of the Galaxy, Groot was one of the many heroes involved in the hunt for the Black Vortex, an ancient power-bestowing artifact. After being captured by Mister Knife, Groot and X-Men members Iceman and Cyclops came across the Black Vortex while escaping from the villain's mobile fortress. Groot submitted to the power of the Black Vortex and tapped into a cosmic level of powers.[19] When he rejected the powers imbued by the Black Vortex once it had been secured, Groot's appearance was slightly altered. Instead of being composed entirely by barky wood, his body became formed by vines topped by protective slabs of wood.[20]

While accompanying Rocket to the Stohlad Ring, Groot was attacked by the Elder of the Universe known as the Gardener. Claiming that Groot had been corrupted by the Guardians and deviated from his destructive purpose, the Gardener shattered Groot. Rocket managed to escape with a splinter of Groot which he subsequently planted so he could regrow his body.[21] However, the Gardener used Groot's remains for the same purpose, planting a garden of twisted maniac Flora colossus whose growth prevented the original Groot from growing bigger than a sapling.[22]

The Guardians of the Galaxy eventually caught notice of the Gardener's use of the army of Flora colossus, and faced them on the planet Telferina. During the battle, Groot managed to get close to the Gardener, and used his healing powers to purify the Elders' body of the poison that drove him mad. In return, the Elder used his abilities to restore Groot's body, not only returning him to his normal size, but also restoring his locution, allowing him to speak full sentences, albeit in third person.[23]

Flora Colossus Physiology: Groot is the member of an alien race of humanoid trees and as such, possesses various abilities unique to his species.

Genius-Level Intellect: Groot has received the finest education from Photonic Knowledge of the Arbor Masters. He was highly intelligent and has a tremendous grasp of quasi-dimensional super-positional engineering. Again, allegedly, as reported by a man openly known as "Maximus the Mad".[27]

Like this? Let us know!
Retrieved from "https://marvel.fandom.com/wiki/Groot_(Earth-616)?oldid=5736674"
Community content is available under CC-BY-SA unless otherwise noted.