Guardians of the Crosswalk 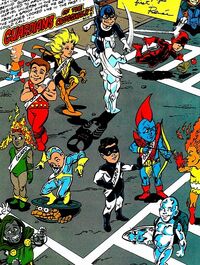 Base of Operations
A crosswalk in the street
Affiliations

The Guardians of the Crosswalk were superpowered children that provided improved security to a supposedly dangerous street intersection that many kid superheroes were to go through. The Guardians had received this authority by a super-ego-ic entity that was not revealed, but that the other kid heroes recognized.

In a spoof of how the original Guardians of the Galaxy (of Earth-691, active in the 31st century)[1] provided a peek at Marvel Universe's future (or one of its possible futures), this team was created to give a look at its past, when most superheroes where high-school children.

Retrieved from "https://marvel.fandom.com/wiki/Guardians_of_the_Crosswalk_(Earth-9047)?oldid=5547342"
Community content is available under CC-BY-SA unless otherwise noted.