After stealing the Black Vortex from Mister Knife, Star-Lord and Kitty Pryde called both the Jean Grey School and New Charles Xavier School teams of X-Men to decide what to do with that powerful item. As they were discussing what to do, the heroes were pinned down by Mister Knife's cosmically-empowered Slaughter Lords. The X-Men and the Guardians found themselves on the ropes, until Gamora submitted herself to the Black Vortex to turn the tide of the battle.[1]

Gamora confronted the Slaughter Lords, easily overpowering them. Magik was ordered by Storm to teleport them all away after retrieving the Black Vortex. They are teleported to Spartax's moon, where friction arose between those who wanted to empower themselves with the Black Vortex, and those who wanted to destroy it. Star-Lord claimed they needed the power of the Black Vortex to fight against the Slaughter Lords, and Kitty Pryde used the Phoenix Force as an example why they shouldn't meddle with such powerful forces. During the discussion, Beast submitted to the Black Vortex. After Nova arrived, having heeded an emergency broadcast sent by Star-Lord during the battle, Gamora decided to take the Black Vortex and use it to show the Guardians and the X-Men the potential they could unleash.[2]

After Angel submitted to the Black Vortex, Storm retrieved it and flew away. She was quickly pinned down by the three cosmically enhanced heroes, and soon the rest of the Guardians and the X-Men joined the fight. It was noticeable that the power of the Black Vortex had corrupted those who used it, as Gamora almost killed Marvel Girl. Beast, Angel and Gamora managed to get hold of the Black Vortex and flew away. As Kitty Pryde was scolding Peter for his past behavior of being in favor of using the Black Vortex, Mister Knife's giant flying fortress appeared before the, having finally found them, and fired their weapons at them.[3]

The heroes survived by various means, Kitty Pryde phased herself and others to survive the explosion, while Magik teleported another group to the other side of the moon. Once reuinited, the heroes used Magik's abilities and cast a spell of invisibility once the Slaughter Lords descended from their ship to ascertain the death of their enemies. The Guardians, the X-Men and Nova fleed the Moon on Star-Lord's Bad Boy, and were approached by young Cyclops and the Starjammers to offer their help. Meanwhile, Beast, Gamora and Angel tried to use the Black Vortex to evolve a primitive planet, but a surprise attack from the Kree ended up with Ronan the Accuser taking the Black Vortex from them. In retaliation, the three cosmically-empowered heroes assaulted Hala, the Kree homeworld.[4]

After being welcomed by the Starjammers, the heroes divided in different groups to tackle three problems that surfaced at the same time. Cyclops, Iceman and Groot travelled to the Spartax Moon in order to distract the Slaughter Lords; Corsair, X-23, Agent Venom, Shadowcat, and Beast heeded a distress call from the orphanage of an ally of Star-Lord which was being attacked; and Star-Lord led the rest to Hala. Upon arriving to the Spartax Moon, Cyclops' team was overpowered and defeated by the Slaughter Lords, who had the orders to bring any of the heroes alive to Mister Knife.[5]

The Accuser Corps tried to fight off their attackers, but were notably overpowered. After being denied by the Supreme Intelligence to use the power of the Black Vortex to fight back, Ronan the Accuser disobeyed him, and submitted to its power, ensuring a successful defense for the Kree homeworld, and forcing Gamora, Beast, and Angel to flee after the latter was knocked down. On Spartax, the group that investigated the attack on Savage Orphanage found themselves with Gara, the first user of the Black Vortex, which caused the destruction of her entire race, in a mission to find and destroy the artifact. Meanwhile, Thane deserted Mister Knife for failing to seize the Black Vortex, but returned to find murdered the inhabitants of the world he was protecting, Brennan-7, leading him to swear revenge, mostly due to Ebony Maw's persuasion, who also convinced him to reconsider Mister Knife's offer for power.[6]

Once the dust from the attack on Hala settled, the Guardians and X-Men sent there attempted to convince the Supreme Intelligence not to get rid of the Black Vortex. Due to the Intelligence's rejection, they attacked him and the Accuser Corps and took the Vortex. Shortly after, Mister Knife's flying fortress arrived to Hala and used all of its firepower to destroy the Kree homeworld. While the Guardians and the X-Men there managed to escape in their ship, Nova was left alone in the void and remanants of Hala, with the Vortex. Meanwhile, Magik and Rocket Raccoon managed to contact Gamora and Beast to reason with them.[7]

Nova took the Vortex and hid it on his home, with the intention of contacting the Avengers for help. However, the Collector soon followed him in an attempt to buy the Vortex. Sam escaped and flew to Spartax, where he expected the Guardians and the X-Men to be. However, he mistakenly arrived to Mister Knife's base, where he was knocked out, and Thane, who had rejoined Mister Knife due to believing the X-Men and the Guardians were the responsibles for the murder of his flock, submitted to the Vortex's power.[8]

As part of their deal, Thane used his cosmically enhanced powers to trap the entire planet of Spartax in amber, including the heroes in Ma Savage's orphanage. The Guardians and X-Men who had dealt with the Kree arrived just in time after the planet had been encased. After escaping from the amber construct with her phasing powers, Kitty Pryde reconciled with Star-Lord, who confessed his love to her. Meanwhile, Mister Knife had met the Queen of the Brood to finish their deal. J'son gave Spartax to the Brood in exchange for having one planet for each ten planets the Brood conquered ever since. Right after Magik returned with Rocket, Beast, Gamora and Angel, the Brood sent hordes of hatchlings to Spartax, who would take advantage of every Spartoi being trapped to plant eggs in their heads and breed. Shortly after, the Slaughter Lords descended on the planet to attack the Guardians and the X-Men.[9]

As the Guardians and the X-Men fought the Slaughter Lords, Cyclops, Iceman and Groot managed to escape from Mister Knife's flying fortress, retrieving the Black Vortex and empowering themselves with its power in the process. Soon after escaping, the trio found themselves in the middle of the forementioned fight. Cyclops handed the Black Vortex over to Captain Marvel, who was going to deliver it to Kitty Pryde, as she had plans with it.[10]

As Carol fleed the fight to get the Vortex to Pryde, she was chased by Thane, Mister Knife and two of the Slaughter Lords. Even though she managed to incapaciate the Slaughter Lords, Captain Marvel ultimately found herself confronted by Mister Knife and Thane. When Thane tried to use his powers to encase Carol in amber, she used the Black Vortex as a shield and deflected the attack towards J'son. Subsequently, Gara arrived to try to destroy the Vortex. After Gara knocked out Thane, Captain Marvel flew away to continue with her objective, now with Gara pursuing her.[11]

Captain Marvel arrived to Spartax with the Black Vortex, and the heroes there decided which one would use it. Star-Lord stopped Jean Grey from submitting, and Quill stopped himself after using the Vortex to see he would become a horrible person. Gara caught up, and recovered the Vortex. Magik convinced her to let one of them use the Vortex for a last time, and Kitty Pryde decided to be that person.[3]

Kitty used her newfound powers to phase through different planes of reality and ascend to a cosmic plane. She managed to phase the entire planet of Spartax and its inhabitants through the amber crystal, later crushing the former amber carcass of the planet with the Broods on it. Meanwhile, Ronan the Accuser joined the brawl against the Slaughter Lords in Spartax's orbit, ultimately forcing them to flee. Once the dust settled, Gara was going to leave with the Vortex, and offered to use the Vortex on whoever wanted to revert them from their cosmic state. Gamora, Angel and Kitty Pyde were the only ones to refuse.

Before departing ways, the X-Men and the Guardians spent some time relaxing in C.I.T.T.. As they were space walking with the use of Kitty's powers, Star-Lord proposed to her, and she said yes.

In the void of space near Spartax, J'son floated, still encased in amber. The Collector approached, being late for recovering the Vortex, and was settled with adding J'son to his collection. In the ruins of Hala, Ronan the Accuser swore to rebuild the homeworld of his empire, and have revenge. On the other side of the cosmos, Thane was convinced by Ebony Maw to use his cosmically-enhanced abilities to rule the universe. And finally, at the center of a star, Gara rested guarding the Black Vortex in her arms.[12] 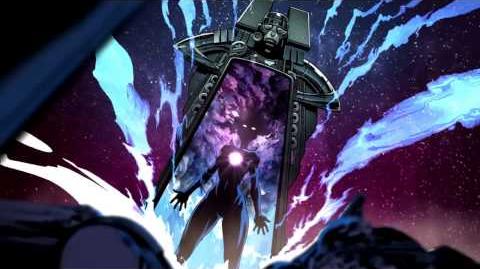 Guardians of the Galaxy & X-Men The Black Vortex Trailer