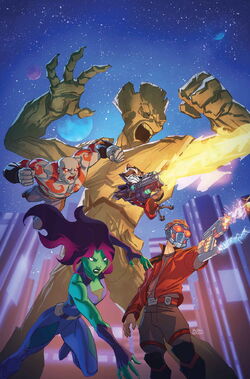 Origin
Formed to protect the galaxy from various cosmic threats

How the Guardians came together reflect similar events to their Earth-199999 counterparts, via saving the galaxy from Ronan the Accuser who was perished as a result.

The Guardians of the Galaxy are a group of intergalactic heroes bent on protecting the universe from various cosmic threats. The team consists of Starlord, half-earthling, half-alien royalty armed with his amazing Element Gun; Drax, a great fighter who is also a loose cannon; Gamora, the most dangerous woman in the universe and skilled in the use of every weapon; Rocket Raccoon; a master strategist with a laser gun and rocket pack (but isn't really a raccoon); and Groot, a huge sentient alien plant. Nova worked with the team when he first received his powers, but left to return to Earth.

After defeating Thanos on Earth, the Guardians locate his Sanctuary at the New Avengers Facility which has been previously shrunken. Believing it to be too dangerous in the hands of Humans, they attempt brake in and steal it which led them into a fight with the Avengers, they soon made peace when they Avengers realize they're acquainted with Thor.[1]

The two groups then face against the High Evolutionary who kidnapped members of both teams to absorb their powers and plans obtaining the remains of Thanos Sanctuary, using it to absorbing the life force from the planet. Star-Lord defies a plan where one group distracts the High Evolutionary while the other goes on board his ship to destroy the Sanctuary remains, within it they find a sarcophagus. They defeat the High Evolutionary taken away the powers he absorbed and seemingly "vaporized" him using the energy from sarcophagus, the same energy caused the whole ship to disappear. Before the Guardians leave Earth, they hand the Avengers the Cosmic Seed to give back to Thor. Unknown to everyone, Rocket had secretly hidden the sarcophagus in his Pocket Dimension Storage Vial.[2]

While locating the Centurion Nova Helmet, they find it in the possession Sam Alexander due to it previously belonging to his father and refuses to give it up. Drax attempts to train him with Rocket wanting to sell it for units, Peter Quill suggests to scare Sam into giving the helmet by showing him the dangerous in space, however this only encourages him more. the Guardians the chase after Sam who flew off to Spartax tracking down a signal believing it to be a lead to his missing father but is revealed to be from J'son, who promises to help find his father by helping him escape his prison.[3]

The Guardians locate Sam, J'son and Mantis into the belly of Space Whale where they find the old ship of the Nova Centurions, in there they also learn that J'son is after the remaining Centurion Nova helmets and what happened to Jesse. Sam starts to see J'son's dark motives after killing Mantis, so he holds his son hostage until Sam locates a working helmet. Once he finally obtained a helmet, J'son uses it to find the rest and sets off leaving Sam and the Guardians to remain in the belly of the beast they also make their way out as the ship self destructs.[4]

While the Guardians fly through space looking for J'son, they have a run in with the Nova Corps who are after Sam's helmet, during the scuffle, Sam sneaks off back to his home. The Guardians go after Sam only to find him facing off against J'son who is after his helmet all. The Guardians assist Sam while protecting his family, during the battle the Nova Corp arrive to settle the fight, but not before J'son about to go "supernova". Sam drags J'son further into space to avoid damage to the neighborhood seconds before he explodes. The Guardians convince the Corpsman to allow Sam to keep his helmet and train him by blackmailing to reveal truth about the Nova's black ops team.[5]

The Guardians battle the Chitauri, a warlike alien race led by Korvac, who set out to destroy the Earth so the numerous heroes that call the planet home could never pose a threat to the Chitauri conquests. The Guardians are defeated, and only Rocket Raccoon escapes capture. He heads to Earth to get aid from Sam Alexander, but the Guardian accidentally brings along Spider-Man. With help from the two heroes, Rocket Raccoon is able to free his comrades from the Chitauri, and destroy their mother ship, putting an end to Korvac's reign.[6]

When Galactus arrives to consume Earth, Iron Man ends up having to speak with him which results in both of them teleporting away. The Avengers track Iron Man to the planet where the D'bari live and witness their ships in the middle an evacuation after Iron Man who was empowered by the Power Cosmic led Galactus here. The Avengers had to work with the Guardians of the Galaxy to keep Galactus from consuming Earth. It later turns out that the planet that Galactus was consuming was becoming unstable before Galactus arrived. Galactus found himself unable to stop the process as the Power Cosmic-empowered Iron Man quotes "Galactus must feed." After the planet exploded, Galactus was knocked out cold, the D'bari settled on another planet, and Iron Man returned to normal.[7]

Meeting the Agents of S.M.A.S.H.

Star-Lord tried numerous times to convince Tony Stark and the Avengers to give them the Infinity Stones they had been collecting since they arrived to the Earth. When Black Widow took the Stones from their vault in the Avengers Tower with the help of Thor, the Guardians teleported to Earth and intercepted them, with the intention to force them to hand in the stones.

The rest of the Avengers arrived to help. Falcon managed to modify the Guardians' own teleporters, and send them back to their ship. The teleporters had been infected with malware so they couldn't function later.[8]

The Guardians later returned to Earth when Thanos was defeated by the Avengers, and the Mad Titan was handed over to them. In addition to thanking the Avengers for dealing with Thanos, the Guardians apologized for having tried to attack them.[9]

The Guardians assisted the Agents of S.M.A.S.H. and the most of Earths heroes to stop the Kree invasion. Afterwards all the present heroes head to Vista Verde and enjoy a celebratory meal at the Gamma Burger restaurant.[10]

Retrieved from "https://marvel.fandom.com/wiki/Guardians_of_the_Galaxy_(Earth-12041)?oldid=5309979"
Community content is available under CC-BY-SA unless otherwise noted.