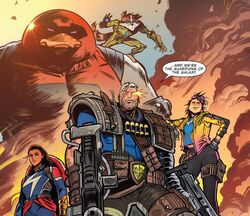 The Rider's attempt to raise Thanos to be good inadvertently created a timeline where Thanos took over Earth to bring about good but ended up creating a dystopia where those that disagreed with him were banished to ghettos. To prevent this dystopia from happening, Cable created the Guardians of the Galaxy and traveled back in time to kill baby Thanos. Cable's first attempt ended in disaster when his team was wiped out by Galactus. So, Cable traveled through time to obtain Pym Particles to shrink Galactus down so he was no longer a threat. Cable then went back in time multiple times to bring numerous allies to stop the Rider, but the Rider killed everyone sent against him. Eventually, though, the Rider was worn down by the sheer numbers and immobilized. Before Cable and his team could kill Rider, baby Thanos attacked them, hurting Cable and killing his team. Cable tried to warn the Rider of the dystopian future he was going to create, but he was killed by the Thanos of his time.[1]

Retrieved from "https://marvel.fandom.com/wiki/Guardians_of_the_Galaxy_(Earth-18138)?oldid=5547359"
Community content is available under CC-BY-SA unless otherwise noted.