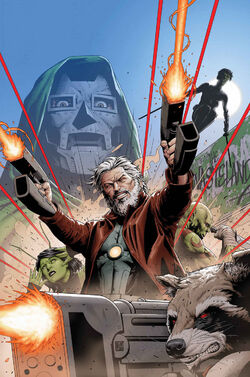 The Guardians of the Galaxy reformed when Mantis had a premonition of the team raiding New Sirius, the archive ship of the Universal Church of Truth, in order to obtain the ultimate weapon to stop Galactus, who had turned the Church into his army of heralds and threatened the end of sentient life in the galaxy. However, Mantis' dementia caused her to misinterpret the vision. When the Guardians raided the New Sirius, they found a moribund Silver Surfer whom Mantis expected to be the weapon. Instead, the Surfer informed Mantis that they key to Galactus' defeat was the Ultimate Nullifier, located on Earth.

The Guardians were attacked and rapidly pinned down by the Imperial Guard. Unable to escape and aware of their impending deaths, Rocket Raccoon and Gamora sent their former teammate Star-Lord with the information necessary to carry out the plan, and died shortly afterwards. Receiving the message above the dead world of Spartax, Star-Lord could not cope with the loss of his lifelong friends and instead hallucinated that they came to get him and accompanied him on one last mission, instead of the reality that he ventured to Earth on his own.[1]

Retrieved from "https://marvel.fandom.com/wiki/Guardians_of_the_Galaxy_(Earth-21923)?oldid=5797317"
Community content is available under CC-BY-SA unless otherwise noted.