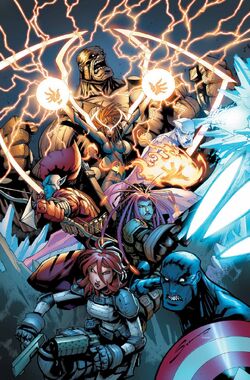 When Earth’s environment collapsed in the 1990s, an American astronaut, Vance Astrovik (Vance Astro), embarked upon the first manned space flight to another star system while Bionic Wars ignited among the growing cybernetic population of Earth. The wars culminated in a nuclear attack on western Canada, and in 1995, the Confederation of Nations was established, uniting mankind in one global society. Unfortunately, anti-mutant prejudice remained strong, and prompted Earth’s mutants to relocate to Jupiter’s moon of Europa.[citation needed]

In 2001 Martians invaded Earth, decimating and enslaving humanity. For years, the Martians ruled the planet before mysteriously abandoning it in 2075. Afterward, Earth was ruled by “Techno-Barons” in various warring city-states. By 2525, the last of these Barons were dethroned, enabling Earth to create a new World Federation by 2553. Over the course of the following century, Earth colonized the other planets of the solar system, genetically engineering each specific populace to withstand the environment of each colony, many of which were specialized outposts. Jupiter became Earth’s manufacturing colony and main Military installation; Mercury was a mining colony; Pluto housed scientific expeditions. Earth began a new golden age of scientific and social advancement.[citation needed]

This new golden age was not destined to last. The Badoon invaded the solar system in 3007 A.D, destroying many of Earth's colonies and ultimately killing nearly every inhabitant of the three settlements on Pluto, Mercury, and Jupiter. The Badoon then invaded Earth itself, decimating the technologically inferior space fleet of the United Lands of Earth. Millions of human beings were exterminated and the remainder forced into slave labor.

Space militia pilot Charlie-27, a native to the Jupiter colony, returned from a solo tour of duty and discovered his home world overrun by the Badoon. He escaped by jumping into a teleportation tube and arrived on Pluto. He joined forces with Martinex, the last Plutonian left on the planet, who had volunteered to stay behind when his people evacuated in order to destroy Pluto's scientific achievements to keep them out of enemy hands. Charlie-27 and Martinex then teleported to Earth, hoping to learn the extent of the Badoon invasion.

A year prior, Vance Astro had arrived on the planet Centauri-IV over a thousand years after his space launch, (having been in suspended animation en route). While he slept, Earth had developed faster than light travel and traveled to Alpha Centauri centuries ahead of him, founding a settlement. Upon learning his achievement was meaningless, Astro left the human colony to complete the surveying mission he was assigned to anyway. He met Yondu, a member of the native humanoid population of the planet, and in 3007, when the marauding Badoon exterminated Yondu's tribe, Yondu accompanied Astro back to Earth. Taken captive by the Badoon upon arrival, Yondu and Astro encountered Charlie-27 and Martinex. Managing to escape the Badoon, the four decided to band together to rid the Earth and its colonies from Badoon oppression. They named themselves the Guardians of the Galaxy, becoming a force committed to resist the Badoon occupation of the galaxy.[1]

In 3014, the Earth-woman Tarin was accidentally transported back in time and across dimensions to the modern era of Earth-616. There, she encountered Captain America, Sharon Carter, and The Thing and elicited their help in her time. They joined with the Guardians of the Galaxy in freeing New York City from the last of the Badoon before returning home.[2]

The Guardians later traveled to 20th Century Earth, where they hoped to retrieve a Badoon memory tape containing a detailed account of the aliens' first invasion attempt in the 20th Century that had ultimately failed. There they encountered the Defenders and helped them defeat the monster Eelar.[3] Although they failed to find what they had come for, they recruited the Defenders to help them liberate Earth once again. Back in the 31st Century, they were joined by Starhawk, and together the heroes finally routed the Badoon Empire.[4]

After the Guardians found a book that told of all the human race being mutated at some point in 21st century, the traveled to Earth-9997 so they could get Terrigen Mist and used it on the humans of their timeline and empower them in order to fight the Badoon invasion; unbeknownst to them it actually all a manipulation by Mephisto.[5] After getting the information from that world's Aaron Stack,[6] they went to Attilan where they confronted Karnak who informed them that their Terrigen Mist was gone.[7] They eventually decided to go to the Baxter Building and find Reed Richards.[8] However, they instead came across Annihilus and Blastaar who had come to kill Richards. The Guardians battled them, but then the Police Department and the Heralds also joined, putting an end to the fight.[9] They eventually met Iron Man 2020 who decided to help the Guardians to mutate their timeline's humans. It is unknown if they succeed, but given that Arno was never seen in Earth-691 it could be that their action diverged their timeline into a new one.[10]

After the Badoon's final defeat, the Guardians found themselves unable to fit into civilian life. They decided to leave Earth[11] and dedicated themselves to being space explorers. Among their various adventures, they recruited the last surviving Mercurian colonist, Nikki,[12] visited an asylum planet,[13] and discovered and destroyed the Topographical Man inside the planet killer Karanada.[14] They discovered the truth about Starhawk’s alternate female form, Aleta, who was Starhawk’s wife. When their spaceship, Captain America, was destroyed in battle against the Reavers of Arcturius, the team recovered a lost Federation space station, Drydock, and there they built a new ship, the Freedom’s Lady.

When Thor of Earth-616 traveled to their future to stop the menace of Korvac the Enemy, the Guardians helped Thor however they could, even journeying with him 'back' to the 20th Century. There, they hoped to protect Vance Astro’s counterpart, Vance Astrovik, who was a likely target for Korvac, and the Guardians soon joined the Avengers in confronting him. During their stay, the Guardians were all granted honorary Avengers membership. They continued their stay in the 20th Century for some time, joining other heroes such as the Thing and Spider-Man in various adventures. During their stay, Astro took the opportunity to unleash his younger self's latent psionic powers, thus ensuring that the boy would not grow up to make the same mistakes he made, despite the protest of his teammates who were loath to alter the timeline in such a manner. Soon thereafter, they returned to the 31st Century, realizing that their own era was where they truly belonged.

Quest for the Shield

The Guardians later embarked on a quest dedicated to recovering the shield of Captain America. One of their first encounters was with the alien Stark, which resulted in Starhawk and Aleta being split into two beings as well as the destruction of the Freedom’s Lady. They claimed the Stark spaceship for their own, calling it the Captain America II. Their quest was ultimately successful, despite the recurring competition of the mercenary team Force, and Vance Astro claimed the shield. Possession of the shield led Astro to later create a new identity as Major Victory. Eventually, Martinex relinquished leadership of the Guardians to Major Victory, expanding the Guardians’ operations, and re-branding them the Galactic Guardians.[citation needed]

Returning to Earth to visit, the Guardians of the Galaxy sub-team found the planet in ruin, victim to an overwhelming addiction to a holographic television created by Doctor Doom, who had survived as a living brain in the Adamantium skeleton of Wolverine.[citation needed]

Recruiting Hollywood and the Inhuman, Talon, into their ranks, the Guardians joined Tarin and her team of guerrilla fighters in thwarting Doom as well as a remnant of Badoon who created human agents in the form of an army called the Punishers.[citation needed]

Their new teammate, Talon, became inflicted with Graal's disease, and the Guardians were forced to return to Earth-616 to receive specific aid due to his Inhuman physiology. The team used the Avengers headquarters, briefly stopping an incursion by the Masters of Evil. When they returned to their future, the Guardians found they had picked up a hitchhiker, Yellowjacket. Rather than immediately return her to her time, the team welcomed her into their membership, since she had helped them defeat the Masters of Evil.[citation needed]

Receiving a call for help from Talon’s mentor and honorary Guardian, Krugarr, both Guardians teams, the Guardians of the Galaxy and the Galactic Guardians, found themselves battling Dormammu. Drydock was destroyed in the battle, and the Galactic Guardians gave their sister team a new ship, the Icarus. In the Icarus, they again returned to Earth to help Tarin, who at this time became President of the Northeast Corridor, and later resurrected Cuchulain and his guardian, Shamrock to offer them a place on the team. Instead, the two declined membership, hoping to serve as Earth-bound heroes.[citation needed]

The hope died soon thereafter, as Cuchulain joined the team as Irish Wolfhound when Charlie-27 was arrested on the false charges of being the criminal Martian Ripjak.[citation needed]

The Guardians had their biggest shake-up when they were asked to help the real Ripjak and the High Evolutionary against the threat of Bubonicus, a genocidal alien that had decimated the Martian race centuries earlier. Vance Astro had allied with Ripjak, much to the defiance of other members, and soon Bubonicus was defeated. The Guardians regrouped, and Charlie-27 was elected their leader.[citation needed]

Preventing the War of the Worlds

Under Charlie’s direction, the team traveled back to the 21st Century in an attempt to stop the Martian invasion from ever occurring. They were successful, but when trying to return to their rightful home in the 31st Century, they encountered the alien Wormhole, and became lost in space-time.

In 3014, the latest incarnation of the Guardians of the Galaxy became stuck in a time loop caused by a temporal instability,[15] the source of which was somewhere in the past. Seeking to repair the timestream, the group went to Earth to rescue the young Geena Drake, which Starhawk's precognitive powers identified as vital to their mission,[16] and, eventually, traveled back in time to 2015 through the Old Hunger.[17] After a brief fight against this era's Guardians[18] and a battle against an army of Stark Unities, controlled by A-Sentience, the Guardians from 3014, with the help of the Guardians of 2015, located the temporal instability source, which was inside a suburban house in Forest Hills.

As some Guardians stayed behind, Geena and Yondu entered the house to face the temporal instability source: Michael Korvac (in his half-man, half-machine form).[19] He explained to Geena that he was dismantling time, thus causing the instability, to recreate the Multiverse under his guidance, using Geena, a singular being on the entire Multiverse, whom he had manipulated through the timestream to that very moment, as the stable reference point around which he would remake the universe. Before he could end his explanation, he was shot in the head by Yondu, causing a new time slip which sent the Guardians of 2015 out of their continuity.

The rest of the Guardians, who were fighting against Stark Unities powered-up by Korvac, entered the house only to find Korvac lying on the floor, but not dead. He told them that time was broken as an result of the last incursion. Vance tried to convince him to try and fix everything, but he couldn't as it was beyond him. Then, Geena let Korvac use her to try and stop the universal decay, but he failed to do so, leaving Geena alone as everything ended.[20]

Retrieved from "https://marvel.fandom.com/wiki/Guardians_of_the_Galaxy_(Earth-691)?oldid=5658653"
Community content is available under CC-BY-SA unless otherwise noted.