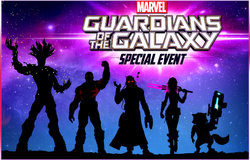 Thanos a student of the Cosmic Conservatory decided to use the Power Gem and his Infinity Gauntlet for an evil plan, so a few of the students tried to stop him, the students were somehow able to get the Power Gem that was now broken into shards, but Star Lord decided to steal Thanos Infinity Gauntlet and got caught, because of that the students had to escape, on Thanos orders they were pursued by their fellow classmates Ronan and a group of Chitauri who went after them to recover the Power Gem shards, they had to escape using escape pods and launching themselves to Planet Earth, eventually crash landing at the Avengers Academy.

When they crashed there, the Guardians of the Galaxy students joined the Avengers Academy and with the help of the other students they defeated Ronan and the Chitauri.

Returning from a their latest adventure, the Guardians were asked by Nick Fury to go back to the destroyed Cosmic Conservatory because he had received a distress signal coming from there. He sent them there to save whoever it was, and check if it was someone wroth recruiting to the Academy. After arriving at the Conservatory destruction site, they found out that Captain Marvel was already there, she told them that she was also there due to the distress signal, that it belonged to a crashed spaceship, and she had already helped them. Star Lord took the opportunity to set up a checkpoint there so other possible recruits or anyone needing the Guardians could get in contact with them, he also extended the invitation to Captain Marvel to join the Avengers Academy.[1]

Retrieved from "https://marvel.fandom.com/wiki/Guardians_of_the_Galaxy_(Earth-TRN562)?oldid=6100259"
Community content is available under CC-BY-SA unless otherwise noted.