Marvel Database
Register
Don't have an account?
Sign In
Advertisement
in: Comics, Guardians of the Galaxy Vol 6, Brett Booth/Cover Artist,
and 91 more
English

Guardians of the Galaxy Vol 6 13

"King of Space." "Master of the Sun." You claim such vast dominions. Is it to balance your small souls? Could I not lay claim to the light and the void, if I wished it? Have I not earned such titles? I, who have mastered all arts, all sciences, all secrets? Whose technology and magic cross the stars as easily as they scramble an alpha telepath's mind? Who would dare to say I have not earned the right? Yet I am king of only a simple nation. On a simple planet. A beloved garden tended by iron hands. And the only title I have ever claimed... is doctor.

They were soldiers, misfits, mercenaries, thieves and a family. They were heroes… but times have changed. The galaxy no longer needs heroes.

It needs super heroes! Now, when the call goes forth – whether it's from a stranded team of planetary explorers or Emperor Hulkling and his Kree/Skrull Alliance – the Guardians of the Galaxy answer!

The New Age of Space brings a new artist! New headquarters! New costumes! New teammates! And an all-new enemy you'll have to see to believe! Get on board, true believer – it's going to be the ride of your life! 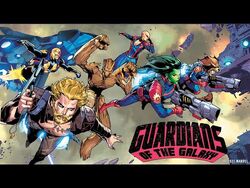