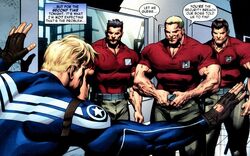 This group of security guards working for Nextin Pharmaceuticals were enhanced by a recreation of the Super-Soldier Serum developed by Jacob Erskine.[1]

Steve Rogers first encountered these Super-Soldier Formula-enhanced guards when he infilitrated a gala held by Nextin Pharma for their shareholders in Madripoor's Sovereign Hotel. He suspected the party could be used as a courtain for any meeting with potential buyers of the Super-Soldier Serum. A group of guards intercepted him when he attempted to reach the VIP gymnasium. The version of the serum the soldiers were enhanced by was dangerously flawed, leading one of them to collapse in the middle of combat due to a brain aneurysm. Steve defeated the remaining guards and managed to find his target, Jacob Erskine.[1]

Once Erskine was gunned down in front of Rogers' eyes, he fled from the hotel. A group of guards rushed to Erskine's office but Rogers was already gone.[2] After Machinesmith captured Rogers and neutralized the Super-Soldier Serum in his body, a pair of guards knocked him down and took him to a cell. These soldiers then took him out of his cell to execute him, but Steve managed to slip from their grasp and defeat them since he still retained his training despite being powerless. After Rogers regained his powers, more guards tried to stop them, but he defeated them swiftly.[3]

Skilled Combatants: The guards were shown to be brutal fighters and proficient with firearms as well.[5]

Serum Instability: The Super-Soldier Serum used to empower these guards was unstable, leading one of the guards to suddely drop dead due to a brain aneurysm.[1]

The Guardsman have used a rifle, a metal bat, and electrical sticks.[5]

Like this? Let us know!
Retrieved from "https://marvel.fandom.com/wiki/Guardsman_Super-Soldiers_(Earth-616)?oldid=5779332"
Community content is available under CC-BY-SA unless otherwise noted.