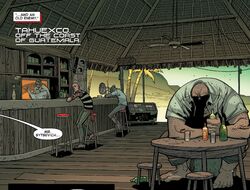 Guatemala, officially the Republic of Guatemala, is a country in Central America. It is bordered by Mexico to the north, the Pacific Ocean to the west, Belize and the Caribbean Sea to the east, Honduras to the east and El Salvador to the southeast. It's capital and largest city is Guatemala City.

The Holy Sepulchre Orphanage Sister Maria de la Joya discovered a wounded and amnesiac Joseph and nursed him back to health. He stayed in the orphanage for a while, but his magnetic powers and their lethal uses started to terrify the children. Maria informed him that he should find the X-Men to find people like himself.[2] Some time following Joseph's departure, Maria was targeted by an unnamed metallic creature. "He" was looking for Joseph and wanted information from Maria. She persistently tried to escape to protect herself and Joseph from this terror. When cornered, she used a stone to hit him. "He" was enraged and attacked, but two giant slugs appeared and started feeding on him. Maria had been rescued by Maggott, who was also looking for Joseph.[3]

After the M-Day event, Magma's powers went out of control as she was attacked by members of a Guatemalan militia. Empath arrived and took her to the Xavier Institute through an O.N.E. chopper.[4]

Leper Queen was captured in Guatemala, having butchered two little girls, killing one and letting the other condemned. As she was on the electric chair waiting for death, her only regret was that she wouldn't see her second victim dead. The preacher who was giving her the absolution was in fact Reverend Craig of the Purifiers, and the guards, executioner and witnesses of the execution were quickly killed for the Leper Queen to be freed and exfiltrated by the Purifiers. She was taken to the Purifiers' base and stayed restrained until Bastion started to use Magus to infect her with the Techno-Organic Virus, and then integrated her among his Human Council.[5]

Horizon Labs were led to a location in Guatemala in which they must defeat the Octobot-controlled Avengers. During the initial stages of the battle, Spider-Man realized that all the inventions he had created at Horizon Labs (ranging from his Cryo Cube, a helmet design, and a noise reduction system) had been used and corrupted by Doctor Octopus.[6] Spider-Man, Silver Sable and Black Widow face off against Dr. Octopus' new Sinister Six, the Avengers. Taking personal control of each of them in turn, Doc Ock was surprised when he took control of Thor and could no longer hold Mjolnir. With an electromagnetic pulse, Mysterio managed to help Spider-Man freeing the Avengers from Doctor Octopus' mind control. Thor, Iron Man and Red Hulk instantly took to the air to try and stop the rest of the satellites from entering Earth's orbit. Mysterio told Spidey and Silver Sable where Doc Ock's lab was and where he would find his vehicle to get there.[7]

Camazotz appeared in San Miguel to announce the time of the Mayapan.[8]

After the battle with Doctor Octopus, the Avengers searched the ocean to confiscate Doc Ock’s technology and to find Silver Sable, who had sacrificed herself in order to allow Spider-Man to defeat Doctor Octopus. Spider-Man took a double shift, but Black Widow took over, saying that Captain America needed him on the surface.[9]

Joelle and Gambit traveled to Guatemala in search of an ancient hidden city, which held information about an artifact.[10]

Havok and Scarlet Witch traveled to Guatemala to find the Akkaba Temple.[11]

At a bar in Tahuexco, Aleksey Sytsevich, formerly the Rhino, was revealed to still be alive. While he drank away his pains, Miles Warren arrived. A man warned Warren that Aleksei didn't like company, but Warren told him that they were about to be best friends. Aleksei said he had no friends, no world, only this. Warren then said he had skills he could use and offered him anything he wanted in exchange. Aleksei shout out that there was nothing he could offer him, but Warren showed him his supposedly dead wife, Oksana, alive and well. Aleksei said it was impossible, but the man said that everything was possible for him, and it would be the same for Aleksei if he joined him. Aleksei then told him he would do anything he asked him to do.[12]

Following a ferocious battle in the soft drink bottling plant where he transformed into the Hulk, Banner escaped Blonsky, and ended up in Guatemala.[13]

Jesus Hayek, the leader of the Guatemalan revolutionary terrorist group known as the Red Devil, kidnapped Tony Stark on his arrival in Guatemala for a business trip in order to forcefully sell him advanced weapons.[14]

In Guatemala, black ops soldier Joseph Ledger aka the "Doctor" - because of the precision with which he performed his secret "operations" - was recruited to Project Hyperion.[15]

Like this? Let us know!
Retrieved from "https://marvel.fandom.com/wiki/Guatemala?oldid=6504034"
Community content is available under CC-BY-SA unless otherwise noted.