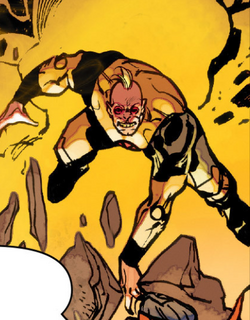 Strong Guy was among his fellow X-Men teammates who were playing a game of baseball when Genosha's Press Gang attacked them in order to kidnap their healer Triage.

Strong Guy joined the battle but had trouble getting around Rictor's shockwaves to make any real contribution. The Press Gang escaped easily by using the possessed Tempus's abilities.[1]

Seemingly those of the Guido Carosella of Earth-616.

Seemingly those of the Guido Carosella of Earth-616.

Like this? Let us know!
Retrieved from "https://marvel.fandom.com/wiki/Guido_Carosella_(Earth-24201)?oldid=5670317"
Community content is available under CC-BY-SA unless otherwise noted.