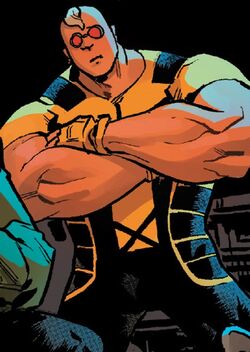 Born in Rhinebeck, New York, to Italian parents, who tried to teach their son the value of a dollar, Guido Carosella showed this by earning a fortune in a settlement when his parents were killed by falling space debris. Skinny and shy, Guido's mutant powers were triggered in childhood when an incident with schoolyard bullies and being hit by a bus ended in his body becoming disproportionally large and overly muscled, separating the already withdrawn boy even further from his peers. Luckily, he had the love and support of his aunt and uncle, who had taken him in after his parents' deaths, and Guido coped with his pain, both emotional and the physical pain generated by his transformed body, by developing an outgoing "public face", rarely letting even those close to him see him in any discomfort. During the incident with the bus, another boy, Charlie Ronalds, was uncontrollably hurt by Guido's flailing. Due to luck, Charlie survived with only a slight limp.[4]

After losing much of his fortune, he began to take on jobs that would allow him to maintain his luxurious lifestyle. This led to Guido becoming the long-time roadie and bouncer for the mutant musician Lila Cheney.[5] He was later among the mutants living on Muir Island who were mentally controlled by the telepath Shadow King. In order to satiate his bloodlust, the Shadow King encouraged arena fighting amongst the Muir Island personnel. Guido received a serious beating at the hands of Rogue.[6]

After the Shadow King was defeated, several of the Muir Island mutants, with the help of Valerie Cooper, were recruited into the new X-Factor team. His teammates included the former X-Men Havok and Polaris, as well as Wolfsbane and Quicksilver. Guido picked up the "Strong Guy" name from a joke he made at an X-Factor press conference when the press asked to know his code name.[7]

One of the first villains the team faced was Mister Sinister and his lackeys, the 'Nasty Boys'. Sinister wished to discredit mutantkind and used X-Factor to do so. One of Sinister's behind-the-scenes allies was a power-hungry Senator with the power to cause bad luck, who manipulated Strong Guy into destroying the Washington Monument while fighting Slab, one of the Nasty Boys. The Senator, who was after the entirety of the X-Factor team, was later slain by Mr. Sinister himself.[8]

During his time on the team, he had a blossoming romantic relationship with a powerful Genoshan mutant and political dissident named Jo Beth. He even visited her Grandmother at her calm, suburban home on the island of Genosha. She took a shine to him instantly.[9]

Also, he participated in the cosmic incidents known as the Infinity War and Infinity Crusade. During the 'War', he and the other superheroes survived a bomb attack on the Fantastic Four headquarters, thanks to the Invisible Woman. Strong Guy was specifically picked out to be one of the heroes to mystically travel the dimensions. He first participated in a fight with the Infinity Watch, holding up against such cosmic powerhouses as Drax the Destroyer. He would later be a vital part in the final battle against the villain's doppelganger's hordes, though this was a distraction so other forces could go in and defeat the villain.[10]

During the 'Crusade' he was part of the assault team that landed in various spots around the Goddess' cathedral. Their goal was to gain back their brainwashed friends and defeat the Goddess's cosmic-powered plans. He teamed up with Firestar from the New Warriors. She was soon taken out by the brainwashed duo of Puck from Alpha Flight and Spider-Man. Strong Guy defeated Spider-Man in a swift, tree-smashing battle, despite being blinded by webbing to the face. Doctor Strange, also brainwashed, soon restrained Strong Guy in a bubble of mystic force, where he stayed while events played out.[11]

Guido suffered a deep depression after being poisoned by Cyber, the leader of the mercenary group Hell's Belles. While at a government laboratory where a cure had been developed, Havok seemingly drank a sample of the poison himself, in order to show Strong Guy that he was with him. This helped boost Strong Guy's morale, though unbeknownst to him, Havok had switched the poison sample to simple tap water. Strong Guy later participated in the battle that took down the Hell's Belles, through Cyber himself escaped after colliding with a subway train.[12]

Another subway train incident turned out much worse, as Strong Guy investigated a train crash where a small dog was the only survivor. Inevitably, the carnage deeply affected his morale.[13]

Guido was once teleported naked from his shower by his old friend, Lila Cheney, who wished to show him the universe again. He managed to convince her that he had a life back in X-Factor, where she reluctantly returned him.[14]

Guido developed a deep friendship with the lycanthrope Wolfsbane. They went on a road trip with the mutant Random, where Guido showed Rahne his hometown friends.[15] Guido personally escorted Wolfsbane to Muir Island when she needed special medical attention.[14]

He remained a member of X-Factor until an incident in the South Seas island nation of Madripoor. Again involved with Lila Cheney, the team became trapped in a confrontation between her and the alien race, the K'Lanti. Lila had stolen an object of great value, called the Harmonium, during the midst of political chaos. The aliens, after destroying a city block, dispersed diamond shaped bombs throughout the city. Despite the neutralization of the bombs and the return of their object, the aliens left behind one last explosive. Guido absorbed the energy of its explosion. Despite releasing it with powerful punches, he suffered a powerful heart attack.[16]

Guido spent much time in suspended animation, until the return of his seemingly-dead friend the Multiple Man, Jaime Madrox. Not fully understanding the situation, Madrox freed Guido, who continued to suffer. Forge created a device to heal him.[17] Afterward he chose to accompany Lila and her band in their travels instead of rejoining the increasingly fractious X-Factor team. Guido became involved in a property dispute between warring alien races, both of whom wished to control a small, barren moon. This dispute was settled when the moon was destroyed during an exchange of weapons on both sides.[18]

After leaving X-Factor, Guido fell on hard times. With Lila nowhere to be found, and finding it difficult to find hero work as a mutant, Guido opted to join the Arena in Tokyo, a mutant fight club. Guido did not fully understand what he was getting into, however, and found himself enslaved. When Storm and Yukio came to investigate the club, Guido helped them bring it down together with Callisto.[19]

Strong Guy moved to New York City to become the enforcer for his friend Madrox's detective agency, X-Factor Investigations, thus rejoining many of his former teammates from the government-sponsored incarnation of X-Factor. The team included Wolfsbane, Rictor, Siryn, Layla Miller, and M.[20]

Guido was assigned to protect a former employee of Singularity Investigations, Henry Buchanan, who had proof of their illegal activities. However, Guido instead killed the man and then called Singularity CEO Damian Tryp, revealing he was working as a mole inside X-Factor.[3]

Guido tried to tell the team that the man had vanished on him but Wolfsbane smelled his blood on Guido's hands and a psychic scan by Monet revealed the truth. It seemed Guido had been subjected to hypnotic conditioning by Tryp to turn him into a mole (which explained his rougher attitude and some inconsistencies in his personality).[21]

A visit with Henry's widow did not go as expected: instead of reacting angrily, Alix Buchanan understood the circumstances in which Guido had acted, and forgave him. They found solace together in their mutual grief from Henry's death.[22]

After the destruction of Mutant Town at the hands of Arcade, Guido went with the rest of X-Factor to their new headquarters in Detroit. He accidentally discovered that Madrox was secretly working for Val Cooper, a fact that had been hidden from the entire group.[23]

When Monet's father was kidnapped, he helped discover his location and assisted in a rescue attempt. They returned to New York, along with the elder St. Croix's kidnapper, Baron Mordo. During a protest, Guido was shot by Ballistique, who was trying to assassinate Mayor J. Jonah Jameson.[citation needed]

His injuries were exacerbated when a Mandroid fell on him. As Monet flew him to the hospital, he professed his love for her. Unfortunately, his wound proved fatal, and he died in the hospital. A defiant Layla Miller brought him back to life; unfortunately, her powers robbed him of his soul. Feeling guilty, Layla vowed to fix him.[citation needed]

When the Thunderbolts were accidentally stranded in Hell, they made a deal with Mephisto to get out in exchange for dethroning the "pretender," who was revealed to them to be Guido.[25] Red Hulk fought against Guido and managed to convince Guido to abandon the position of Hell lord and try to regain his lost soul, allowing Mephisto to regain the throne and let the Thunderbolts return to Earth. Red Hulk offered Guido the opportunity to return with them, but he preferred to stay until he could regain his soul.[26]

At some point Guido returned to Earth, where he assisted the X-Men in their assault on New Attilan,[27] and later joined his fellow mutants - including former teammates Rictor and Shatterstar - in New Tian.[28]

Later, he and the New Mutants joined Cyclops and Wolverine to form the newest incarnation of the X-Men. When Cyclops and Wolverine raided a prison to free all of its mutant prisoners, dupes of Multiple Man blew up. Guido was able to protect everyone by absorbing the energy of the explosion, but the strain on his body proved fatal. He collapsed and died looking at Magik.[29]

Following the foundation of a mutant state in Krakoa by the hand of Charles Xavier and his allies, Strong Guy resurfaced as a citizen of the nation, having been presumably reborn by the hand of The Five, a group of mutants capable of combining their powers into a process of resurrection, brought together by Xavier as part of his plans for mutant ascension.[30]

Kinetic Energy Absorption: Strong Guy has the ability to absorb kinetic energy and use it to enhance his physical strength to above normal limits. However, he cannot store the energy he absorbs for very long; as a rule, he must expend it within 90 seconds to prevent the enormous amounts of energy from permanently distorting his body. He is in constant pain from the existing distortion, although he hides it well, traditionally playing the role of team comedian to distract himself. An unusual percentage of his body mass is stored in the upper half of his body, causing him to appear top-heavy, imposing, and somewhat comical.

He is a multi-talented actor and stand-up comedian. He is also a formidable hand to hand combatant, often using street fighting techniques that allow him to make full use of his strength.

Class 50, Guido at a base level can lift 50 tons however with sufficient kinetic energy absorption Guido becomes class 100 and lift over 100 tons.[31]

As a side effect of his powers, Guido possesses a bad heart that has given him problems in the past, including a serious heart attack that left him in a coma for several weeks. Guido can only absorb so much kinetic energy before his heart begins to weaken. He currently has a pacemaker that has greatly improved his heart. However, excessive strain or absorbing too much kinetic energy can overload his heart, as what happened while fighting the Hulk. Guido must also purge all the energy he absorbs within a 90 second period or risk having his body disfigured even more than it already is, possibly even to some fatal degree. He is also extremely nearsighted and wears thick corrective lenses.

Like this? Let us know!
Retrieved from "https://marvel.fandom.com/wiki/Guido_Carosella_(Earth-616)?oldid=6427417"
Community content is available under CC-BY-SA unless otherwise noted.