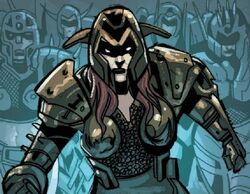 Gullveig was the sister of Freyja,[2] and the daughter of Vanir lord Freyr.

She was born after Freyja married Odin Borson in order to end the Aesir/Vanir War.[2]

At some point, she became steward of Vanaheim.[2]

After the war of the Manchester Gods (helped by Surtur) against the old Gods of Otherworld, Surtur's Herald came to Gullveig, offering the Fire Demon's assistance, like he did to her father Freyr.[2][3]

Gullveig being sceptical, the Herald insisted on the inferior status of Vanaheim, mentioning the victory of the Manchester Gods, convincing her to accept Surtur's help.[2]

Quickly, the Temple of Union where Aesir and Vanir became one was set in flames, and intended to burn down the statue of Odin and Freyja, but were interrupted by the arrival of Thor, the Warriors Three and other Asgardians. Gullveig soon summoned Engels who destroyed the Temple while the Vanir retreated.[2]

Gullveig later opposed Fandral and Asgardians in Vanaheim while the fire spread to the Nine Realms.[1]

Her whereabouts are unknown.

Gullveig possesses the the conventional superhuman physical attribute of a Vanir goddess.

Gullveig (previously) had Engels at her disposal that she can summon using the Manchester Gods.[2]

Like this? Let us know!
Retrieved from "https://marvel.fandom.com/wiki/Gullveig_(Earth-616)?oldid=5758508"
Community content is available under CC-BY-SA unless otherwise noted.