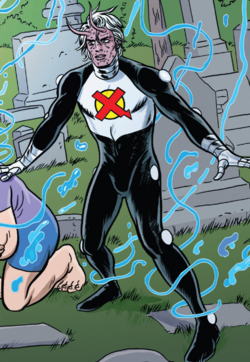 At a very young age, Guy noticed his mutant powers. His skin would easily get irritated and he was always in tremendous pain. Guy was raised in foster care after his parents died in a mysterious fire.[citation needed]

Guy underwent extensive martial arts training and mental disciplines to try and block out the pain. Professor X was able to provide Guy with a special sensory-dampening suit. However, he remained depressed and kept a gun to play 'Russian Roulette' with.[citation needed]

He was recruited into X-Force, and surprisingly was quickly made the leader after the Boys R Us disaster. He resented the name of Mister Sensitive, and preferred to call himself the Orphan. Coach began to urge the others into making Guy doubt himself after Guy refused to let a young mutant named Paco Perez be dissected for study. Coach even dug up information on his parents' deaths, insinuating that Guy was responsible for the fire.[citation needed]

Coach ordered U-Go-Girl to load Guy's gun after distracting him. Guy was easily able to tell the difference due to his senses. He and Wolverine were able to kill Smoke and Succubus, and Edie ended up shooting Coach.[citation needed]

Guy was forced into making the team lose to pay back money the CIA lost on Paco. On their next mission Edie was shot by the Bush Rangers, causing Guy to become even more depressed. [citation needed]

Venus Dee Milo was selected to replace her, but Guy initially rejected her. After hearing her own tragic tale, he accepted her, and the two became lovers.[citation needed]

Guy had problems both with The Bad Guy posing as him, and with the Mysterious Fanboy joining the team seeking revenge for the death of U-Go-Girl.[citation needed]

Guy stepped down as leader with his good friend Anarchist taking his place. On their last mission, which they thought would give them enough money to retire comfortably, the team was ambushed. Guy had 'a funny feeling' about the mission. Tike and Guy survived the initial attack, then ran in for one last blaze of glory but they were both killed.[citation needed]

Smith was revealed to have returned from the dead and become the elusive founder of a successful line of skin products. Smith was recruited by Dead Girl and Doop to join the newly reformed X-Statix in order to confront Zeitgeist and his new team, The X-Cellent.[2]

Superhuman Senses: Guy had greatly enhanced senses, making him incredibly sensitive to his surroundings. His senses were at least as acute as those of Wolverine and Daredevil. He seemed to have a form of danger sense; any other extrasensory abilities were unknown.

Levitation: Guy possessed the ability to levitate himself. It would appear that this was an ability he learned through study and practice, and not a part of his mutation (although he claims that his mutation helped).

Guy was a master of martial arts and mental discipline.

Guy's costume was specially designed to dampen his powers, allowing him to function more normally.

Like this? Let us know!
Retrieved from "https://marvel.fandom.com/wiki/Guy_Smith_(Earth-616)?oldid=5641979"
Community content is available under CC-BY-SA unless otherwise noted.