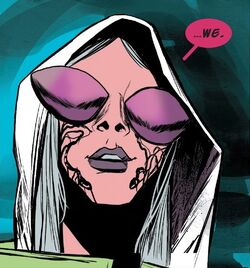 Daughter of George and Helen Vogel Stacy, Gwen Stacy was encouraged by her mother to pursue her interests, which led to develop a fondness for natural science and attend college at Empire State University, majoring in biochemistry. While there, she met a fellow student named Peter Parker and the two developed a friendship which grew into a romantic relationship. Peter was secretly a costumed vigilante known as Spider-Man, and one night during his fight with Doctor Octopus, police captain Stacy was killed while saving a child bystander. In the wake of her father's death, Gwen's relationship with Peter became troubled due to his support of Spider-Man, whom Gwen believed to be the one who had killed her father.[1]

Miserable and troubled, Gwen's future was changed when an alternate universe incarnation of herself dropped from a portal in the sky and landed in front of her - resulting in a divergent timeline relative to the Prime Marvel Universe.[3]

Initially confused and worried that the new short-haired Gwen was a clone, Gwen-617 soon learned that her angsty short-haired counterpart was a superhero from another dimension, but before she could get more information out of her, Gwen-65 stormed off in a rage. Later, Gwen-617 turned down a date offer from Peter and remarked to Gwen-65 that she could tell Peter was hiding something from her. When Gwen-65 confronted her over not telling her that her father had been murdered, Gwen-617 learned that the source of Gwen-65's rage - amplified by an amorphous symbiotic entity that had bonded to her - was due to her father having been put in a coma by her archenemy, Matt Murdock. Gwen-617 helped Gwen-65 come to the epiphany that she should treasure that she's still able to spend time with her father, coming to terms with her own loss in the process.[2]

Using her scientific knowledge and the Empire State University's supercomputer, Gwen located a weak-spot in the boundaries between realities; asking Tony Stark and Ant-Man for a second opinion. Gwen-617 and Gwen-65 traveled to the top of the George Washington Bridge, where after sharing some words of farewell, Gwen watched Gwen-65 leap off and return to her timeline.[1]

Inspired by Gwen-65, Gwen-617 became a detective and later bonded to the Venom symbiote of Earth-617 to become the superhero Spider-Woman. Travelling to other dimensions, she learned of the fate that had befallen numerous other incarnations of herself and encountered other incarnations who had become Spider-Woman. Forming a secret multiversal organization with the other Spider-Women, she avoided taking part in the Totem War. Closely monitoring Earth-65's Gwen Stacy, she interceded through Gwen-65's Dimensional Travel Watch to prevent her from killing Matthew Murdock and sent her to meet her past self, creating a time loop. When two Watchers, Utaa and Utau came to investigate and picked a fight with the children of Gwen Stacy of Earth-8, Gwen-617 intervened through a dimensional portal and terrified the Watchers with her symbiote before explaining what had transpired; returning to her home dimension when her own Dimensional Travel Watch alerted her to a crime in progress.[1]

Through her connection to the Venom symbiote, Gwen Stacy possesses the following powers:[1]

Like this? Let us know!
Retrieved from "https://marvel.fandom.com/wiki/Gwendolyn_Stacy_(Earth-617)?oldid=6118923"
Community content is available under CC-BY-SA unless otherwise noted.