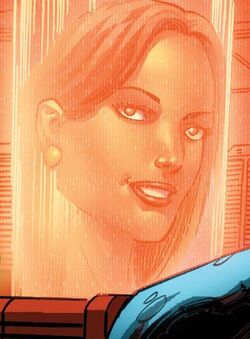 Wow! All these shiny new processors? Forget diamonds. You need to go down a step on the periodic table to turn a 21st century girl's head... Silicon is my best friend.

Created to serve as Stark's newest A.I. system soon after J.A.R.V.I.S. went rogue.[1] This new A.I. was molded and named after Tony Stark's friend and CEO of Resilient, Pepper Potts, in order to remind him of Earth during his trip in space.[2]

Among its capabilities, P.E.P.P.E.R. can take control of Iron Man's armor when needed.[3]

Once Stark returned Earth, he wanted to give P.E.P.P.E.R. a new purpose, and uploaded her into the core of Troy, in order to run the new city he was building, along with a new name: H.E.L.E.N..[4]

Like this? Let us know!
Retrieved from "https://marvel.fandom.com/wiki/H.E.L.E.N._(Earth-616)?oldid=6119203"
Community content is available under CC-BY-SA unless otherwise noted.