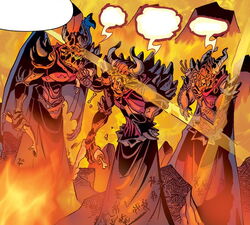 The Haazareth Three are a trio of demons who amuse themselves through granting power in exchange for sacrifices. They provided Doctor Doom with mystical power. As part of his bargain, he took the soul of his old lover Valeria by placing a special necklace on her. In exchange, the Three gave him a mystical armor.[citation needed]

He then attacked the Fantastic Four, having offered to give the Haazareth Three their souls as well. The Three tortured Franklin Richards.[citation needed]

However, Mister Fantastic and Doctor Strange tricked Doom into boasting, and the Three angrily grabbed Doom through the Orb of Agamotto to their dimension. The Fantastic Four followed and were able to free Franklin.[citation needed]

The Three tortured Doom and mentioned Mephisto as their 'master'. However, Mister Fantastic soon banished Doom to a 'Moebius dimension.'[citation needed]

Retrieved from "https://marvel.fandom.com/wiki/Haazareth_Three_(Earth-616)?oldid=5748358"
Community content is available under CC-BY-SA unless otherwise noted.