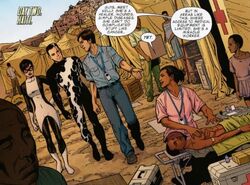 Haiti is a country is located on the island of Hispaniola, in the Caribbean Sea. It occupies the western three-eighths of the island which it shares with the Dominican Republic. The capital city is Port-au-Prince.[3]

Throughout history, Haiti has been a country of conflict, through occupation and revolution. It was colonized by the Spanish in the 15th and 16th Century. Then by the French in the 17th Century. Since then it had been the place of much political strife and natural disasters.

Haiti is also well known as the birthplace of the Voodoo religion, deriving from the various religions taken from the indigenous population, the imported African slaves from past centuries, and the Catholicism of their former masters.

In 1944, President Roosevelt traveled to Haiti to meet with British officials about the state of the World War II. A Nazi operative known as the Zombie Master raised an army of undead Zombies to attack the president's ship, but they were stopped by the Sub-Mariner who slew the Zombie Master and his undead horde.[4]

Brother Voodoo is a native of Port-au-Prince. after twelve years of education and practice in the United States. His brother Daniel Drumm had become the local Houngan, but was dying from the spell of a rival bokor who claimed he served the evil serpent god Damballah. Before he died, Daniel made his brother vow to visit Papa Jambo, who had instructed Daniel in the arts of a Houngan.[5]

When Mistress Death vanished, Deadpool visited Haiti to seek the aid of Black Talon in finding the cause of her disappearance.[2] Deadpool later returned with the Mad Titan Thanos, this time asking Black Talon to take them to Hell.[6] After Death was rescued from the Land of Couldn't-Be Shouldn't-Be, Black Talon returned to Haiti with a new-found appreciation for life, and freed all the zombies he'd previously enslaved.[7]

Like this? Let us know!
Retrieved from "https://marvel.fandom.com/wiki/Haiti?oldid=5781705"
Community content is available under CC-BY-SA unless otherwise noted.