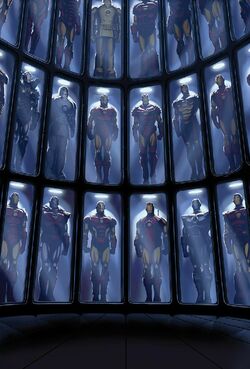 The Hall of Armor is the name given to any type of display where Tony Stark's numerous Iron Man Armor are exhibited or simply stored.

There have been several Halls of Armor over the years, most notably in the Stark Tower.[1][2][3][4] There have also been Halls of Armor in Stark's personal residence[5] and secondary bases.[6]

The Hall of Armor was created by Tony Stark in his mansion in order to display the Iron Man Armor he created, and it was located in his workshop. Originally, it only housed MKs I through IV.

During Stark's birthday party, James Rhodes entered the Hall and took the Mark II armor, along with a spare mini-arc reactor. After a brief skirmish with a drunk Stark, Rhodes stole the armor and it was used as a basis for the War Machine armor.[7]

Following the creations of MK V to MK VII, the display was widened. After the Battle for New York, Stark created an underground annex where MK VIII to MK XLI were housed. The main display (MK I to MK VII) was destroyed following The Mandarin's attack on Stark's mansion after being publicly threatened by Tony, and access to the underground section was blocked by debris.

As soon as the debris was removed, Stark ordered J.A.R.V.I.S. to set in motion the House Party Protocol, which activated every single one of the armor housed in the underground section to be controlled by J.A.R.V.I.S. to assist him in his final battle against Aldrich Killian and his Extremis-enhanced soldiers.[8]

In this universe, the storage of Tony Stark's numerous suits is called The Armory. It is located near James Rhodes' home in the abandoned building where Tony and his friends hang out.[9] Tony Stark later set up a new Amory inside the Makluan Temple of Wisdom in New Jersey before he went to China to search for Gene Khan. It had improved equipment and defenses.[10]

Like this? Let us know!
Retrieved from "https://marvel.fandom.com/wiki/Hall_of_Armor?oldid=5249168"
Community content is available under CC-BY-SA unless otherwise noted.