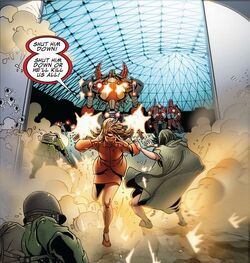 Hammer Industries (NYSE: HMR) is an British global aerospace, defense, security and advanced technologies company with worldwide interests. It is headquartered in London, UK. Hammer Industries employs thousands people with facilities all over the world. The President and CEO of Hammer Industries is billionaire industrialist Justin Hammer

Hammer Industries was the international design and manufacturing firm founded by Justin Hammer, and became one of the leading weapons suppliers in the world after Stark International moved out of weapons production.[2]

The mother-daughter combo teamed up with corrupt generals, soldiers and technology-powered super-terrorists such as the Spymaster and one Ezekiel Stane - whom Sasha was dating. It is also revealed that Sasha's father was Iron Man's old nemesis The Mandarin. As a family, The Mandarin, The Hammers and Stane aimed to ruin and discredit Tony Stark as he established his new company Stark Resilient.[4]

Following Justine's death at the hands of Sasha in revenge for what the Mandarin had done to Ezekiel,[5] the company's fate is unknown.

It was mentioned that Hammer Industries tried to bid on the renovated Baxter Building alongside Alchemax and Roxxon only for them to be outbid by Parker Industries.[6]

Retrieved from "https://marvel.fandom.com/wiki/Hammer_Industries_(Earth-616)?oldid=5689512"
Community content is available under CC-BY-SA unless otherwise noted.