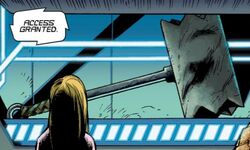 The Hammer of Angrir was one of the seven mystical war hammers the Serpent summoned to awaken the Worthy.[1] It crashed on Yancy Street, the old neighborhood of the Thing.[2] While examining it, Mister Fantastic asked the Thing to try to lift it, resulting in his transformation into Angrir, Breaker of Souls. Shortly after picking it up, he destroyed the surrounding area with the hammer.[3]

After the Serpent's defeat,[4] the hammer was placed in a vault in the Baxter Building.[5] Valkyrie later convinced the Thing to give it up to her.[6]

Like this? Let us know!
Retrieved from "https://marvel.fandom.com/wiki/Hammer_of_Angrir?oldid=6434988"
Community content is available under CC-BY-SA unless otherwise noted.