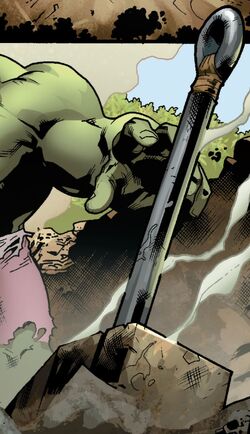 The Hammer of Nul was one of the seven mystical war hammers the Serpent summoned to awaken the Worthy.[1] It fell in Brazil, drawing the attention of Hulk and Red She-Hulk. While investigating the crash site, the Hulk was drawn to the hammer and was transformed into Nul, Breaker of Worlds. He warned Red She-Hulk to run before losing control, and going on a rampage in a local town nearby.[2]

After the Hulk managed to destroy the hammer, thus breaking free of Nul's control,[3] its remnants were claimed by the Forgiven. Valkyrie later convinced them to give the remnants to her.[4]

Like this? Let us know!
Retrieved from "https://marvel.fandom.com/wiki/Hammer_of_Nul?oldid=6543231"
Community content is available under CC-BY-SA unless otherwise noted.