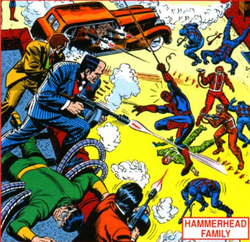 The Hammerhead Family were a Maggia crime family based in New York City. Who were involved in a variety of criminal activities, including the drug trade (including the manufacturing of methamphetamine) and the protection rackets.[4]

It was initially lead by a man known only as "Top Man". His family clashed with the Fantastic Four when they attempted to legally gain ownership of the Baxter Building in order to gain the advanced technology inside. When the Fantastic Four defeated the Top Man, his ownership claims the Baxter Building were dismissed by the courts, and he was assassinated on order of his own family due to his failure.[5][6] The family then sought a new leader who would direct operations along more traditional lines, and chose a newcomer known as Hammerhead, an amnesiac with an Adamantium skull and an affinity for 1930s gangster films. Hammerhead bases his methods, and even his personality, on these movies.

Retrieved from "https://marvel.fandom.com/wiki/Hammerhead_Family_(Earth-616)?oldid=5583426"
Community content is available under CC-BY-SA unless otherwise noted.