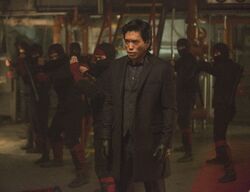 At ancient times, the Elders of K'un-Lun gathered together in K'un-Lun to learn how to focus their Chi to heal. However, there were five heretics among them who sought immortality and power. The Elders saw this as an aberration, and banished Alexandra, Bakuto, Gao, Murakami, and Sowande from K'un-Lun forever. Together these outcasts became the five fingers of The Hand. Armed with the virtual immortality granted to them by "The Substance", they each returned to their native lands, ruling over their own domain, each growing in power and influence.[4] At times they worked as one, at other times they worked against one another.[2][5]

The Hand is a multi-national criminal empire that has grown from an ancient clan of ninjas. At some point, a faction of the group gained a stake in Rand Enterprises and used its resources to build influence in the drug trade. They went so far as to have Wendell Rand assassinated in order to protect their operation within his company, using a resurrected Harold Meachum as their puppet leader. [6]

More than a decade later, members of the Hand were active in Hell's Kitchen where they sought to deploy the Black Sky. This activity was opposed by Stick, a member of the Chaste whose members were aligned in direct opposition to the Hand.

Daredevil and the Punisher got involved when Nobu and the Hand caused chaos in Hell's Kitchen. This conflict led to the death of Elektra Natchios. Nobu was subsequently killed by Stick. Unbeknownst to their enemies. the Hand had procured the body of Elektra and began resurrecting her to fill the role of the Black Sky.[7]

Upon returning to New York after his presumed death, Daniel Rand got involved with disrupting Hand operations operating as the Iron Fist after meeting with Harold Meachum. Aware of Rand's gifts, Bakuto attempts to manipulate Rand into working for the Hand, but is disrupted by his former protege Colleen Wing. Shortly after defecting to Rand, Wing and Davos fatally defeat Bakuto, driving the Hand back into the shadows. [8].

One month after Meachum's death, the remnants of the weakened Hand, led by Alexandra, initiate an excavation in Midland Circle in order to replenish their supply of The Substance after depleting it in order to revive Elektra. The recent operation attracts the attention of Rand and Wing, Jessica Jones, Murdock, and Luke Cage. In order to replenish their Substance supply, the Hand required Rand's Iron Fist in order to access the supply line. Elektra captures Rand after murdering Stick and later betrays Alexandra when Bakuto and Murakami openly question Alexandra's leadership. Murdock, Cage, Jones, and Wing rescue Rand after planting explosives at the dig site. Cage, Jones, Rand, and Wing escape the blast site while Murdock stays behind to reason with Elektra. During the aftermath, the battle with the Hand is covered up, with the leadership presumed dead. [9]

Like this? Let us know!
Retrieved from "https://marvel.fandom.com/wiki/Hand_(Earth-199999)?oldid=6224736"
Community content is available under CC-BY-SA unless otherwise noted.