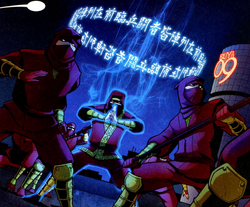 the history of this incarnation of The Hand is most likely identical to that of their Earth-616 counterparts. At some point in history, Wolverine became their enemy. Exact details surrounding this event are unknown however, except that it had something to do with an ancient samurai curse.

When Power Pack was visiting Japan because Jack signed Alex up for the game show Ninja Master, the four kids saw Wolverine locked in a battle with the Hand. The kids immediately came to his aid and for a brief moment managed to get the upper hand over the ninja’s, until the Hand used their secret weapon; magic. With a spell, they were able to cancel out the heroes powers, leaving Power Pack defenseless. Wolverine however continued to fight despite the loss of his healing factor, and was able to drive the ninja’s off.

Retrieved from "https://marvel.fandom.com/wiki/Hand_(Earth-5631)?oldid=5547529"
Community content is available under CC-BY-SA unless otherwise noted.