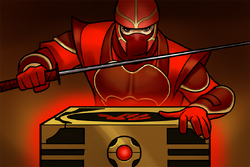 The hand was an ancient ninja organization.

They were working alongside the Kingpin when he decided to take Nick Fury to trial for crimes against humanity. During the trial they were collecting occult magic relics, and battling the Academy students who were investigating the Kingpin, but their true collective intent was to take whatever power Nick Fury was hiding in the Academy hidden vaults after they were successful in the trial.

The Kingpin also made them guard the other students from his own school, who after not agreeing with his methods, were jailed inside the school themselves.[1]

Retrieved from "https://marvel.fandom.com/wiki/Hand_(Earth-TRN562)?oldid=5547549"
Community content is available under CC-BY-SA unless otherwise noted.