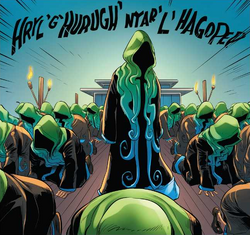 Founded by McTavish via the website Headscroll.com, Happyology was formed to bring about the rising of the Undergod, Uluath.

Before the rising could take place, however, Elsa Bloodstone infiltrated the group, unintentionally butt-dialing Kid Kaiju and Aegis to her aid.

While Aegis unwittingly completed the ceremony, summoning the Dread Uluath to the surface, he and Kid Kaiju were able to defeat him in a similar manner to how Goom once defeated Pildorr the Plunderer, ending Happyology.[1]

Retrieved from "https://marvel.fandom.com/wiki/Happyology_(Earth-616)?oldid=5547557"
Community content is available under CC-BY-SA unless otherwise noted.