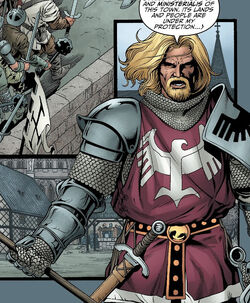 In the year 1480 and in the town of Zeulniz (south of what we know as Leipzig, Germany), Harbin Zemo, the Granary charge man and ministerialis of Zeulniz, stood alone and slaughtered an invading horde of Slav raiders with an armor he borrowed from others. Impressed with his courage, the emperor of the Holy Roman Empire chose to elevate this town administrator who was little more than a peasant himself to the status of Baron of Zeulniz and the outer lying areas.[2]

Harbin was hailed as a hero by the townsfolk. Harbin vowed that whenever good men and women were threatened he and his kin would be there to serve the cause of justice. However, as the years passed Harbin was corrupted by the power he now had over the townspeople and the responsibilities that came with it. He became cruel to the serfs who worked his land and would kill those who did not show him the reverence he felt he deserved as their hero.[3]

Harbin was the first in the line of the Zemo Barony.

Like this? Let us know!
Retrieved from "https://marvel.fandom.com/wiki/Harbin_Zemo_(Earth-616)?oldid=6030516"
Community content is available under CC-BY-SA unless otherwise noted.