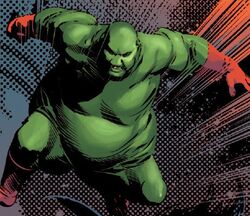 Hardball is a member of the Shi'ar Imperial Guard, hailing from one of the married worlds brought into the Empire. Hardball first appeared as an illusion created by his teammate Magique to disorient Quasar and Starfox at Captain Mar-Vell's grave site.[1] He later appeared on the Shi'ar Throneworld when it was attacked by the Kree Starforce.[2]

Rubbery body: allows him rebound off any surface, object or beings he strikes. His body is also a high resistant to injury.

Leaping: Hardball has a very strong legs that allows him to jump great heights and distances.

Like this? Let us know!
Retrieved from "https://marvel.fandom.com/wiki/Hardball_(Imperial_Guard)_(Earth-616)?oldid=5995248"
Community content is available under CC-BY-SA unless otherwise noted.