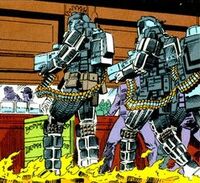 Base of Operations
Hardliners Base and mobile within Canada
Affiliations

The Hardliners were employed by Joshua Lord (an alias for the Master). They were to hunt down any super-humans and either take them captive for experimentation of to eliminate them. Their leader was named Reginald Tork.

They first appeared when they attacked Albert Louis in Halifax[1] and chased him to Toronto where he confronted Alpha Flight. There, another contignent of Hardliners had caused a battle between the Wrecking Crew and Alpha when they had tried to capture Thunderball. When Albert approached Alpha Flight, the Hardliners claimed that they were 'taking him in' in accordance with the Super-Powers Registration Act. When Alpha Flight refused to turn him over, the Hardliners attacked, and were easily defeated by Guardian and taken into custody.[2]

The entire group was freed when their mysterious backer found legal technicalities in their case and offered to pay for all damages.[3]

Somehow, later on, they captured Albert again and Alpha had to rescue him. Rather than facing Alpha Flight directly, the Hardliners made them run their training course, tiring them out. At the end of the course, the heroes met Omega Flight. It was then revealed that the Master had been controlling the Hardliners all along. In the ensuing battle the the Master was apparently killed and the Hardliners taken into custody.[4]

Retrieved from "https://marvel.fandom.com/wiki/Hardliners_(Earth-616)?oldid=3676559"
Community content is available under CC-BY-SA unless otherwise noted.